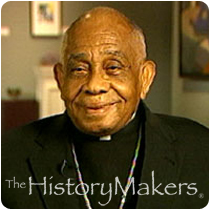 Religious leader Bishop Joseph Howze, bishop emeritus of Biloxi, Mississippi, was the first black Catholic bishop appointed in the twentieth century. He was born Lawson Howze on August 30, 1923, in Daphne, Alabama. He grew up amid the Gulf Coast’s shipping and fishing industries. Howze attended Heart of Mary in Mobile, Alabama, for kindergarten, but later was transferred to the segregated public schools of Mobile. He graduated from Mobile County Secondary School in 1944, and in 1946, he graduated from the Alabama State Branch Junior College in Mobile. Earning his B.A. degree from Alabama State University in 1948, Howze worked as a teacher at Mobile’s Central High School. That same year, he converted to Catholicism and took the name of Joseph. In 1952, Howze was hired to teach at his first Catholic school, St. Monica, in Tulsa, Oklahoma.

Drawn to the priesthood, Howze was admitted to Christ the King Seminary at St. Bonaventure University in New York. He received his doctor of divinity in 1959 and was ordained as a priest for the Diocese of Raleigh, North Carolina, that same year. Howze was a pastor in Asheville, North Carolina, when he was consecrated titular bishop of massita and auxiliary bishop of Natchez-Jackson, Mississippi, in 1972 by Pope Paul VI. Howze was installed as bishop of the Diocese of Biloxi on June 6, 1977, with responsibility for the southern third of Mississippi. In his twenty-three years as bishop, the diocese grew nearly 30 percent, from 50,000 to almost 66,000 parishioners. Howze has served on the National Council of Catholic Bishops (NCCB) Ad Hoc “Call to Action Committee,” the World Peace Committee of the United States Catholic Conference, and the Mississippi Health Care Commission.

Howze is presently a member of the NCCB Liaison Committee to the National Office of Black Catholics; the Biloxi Regional Health Center Board; the Board of Directors of the Gulf Pines Girl Scout Council; the Knights of Columbus; the Knights of Peter Claver; and the NCCB Interreligious and Ecumenical Affairs Committee. As the national episcopal liaison of the Apostleship of the Sea, Howze annually blessed the Gulf Coast fishing boats that ply their trade in the Gulf. Howze retired from the diocese on June 6, 2001.

Bishop Joseph Howze was interviewed by The HistoryMakers on November 12, 2002.