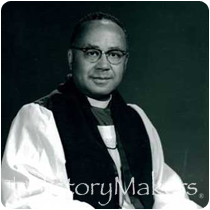 Bishop John Burgess was born in Grand Rapids, Michigan, on March 11, 1909. He attended the University of Michigan, earning a B.A. in 1930, and an M.A. in 1931. Burgess went on to the Episcopal Theological School in Cambridge, Massachusetts, graduating in 1934, and he became an ordained minister in 1935.

He began his career by serving the African American working classes of Michigan and Ohio after World War II. He started at his home parish of St. Phillip's Church and was later given charge of St. Simon of Cyrene, a mission church that served a Cincinnati neighborhood in abject poverty. In 1946, Burgess became the Episcopalian chaplain of Howard University, where he served for ten years. In 1951, Burgess was named a canon at the National Cathedral in Washington, D.C. During his five years there, he often spoke of civil rights issues, using the national pulpit to his advantage. After leaving Howard and the National Cathedral, Burgess went to Boston, where he took a post as archdeacon of the city's missions and parishes and worked to improve the urban ministry of the church there. In 1962, Burgess was made a bishop suffragan, and in 1970, he became the first African American bishop of the Episcopal Church. Under his leadership, he instituted a number of programs that sought to make the church more inclusive of minorities and give the congregations more of a voice, and he established the Joint Urban Fund, which gives money to local groups fighting poverty. He retired in 1975.

After his retirement, Burgess was honored with more than a dozen honorary degrees, and he went to Yale's Berkeley Divinity School to teach and serve as interim dean. He also served as chairman of St. Augustine's College in North Carolina.