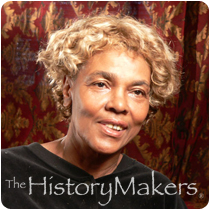 See how Bishop Imagene Stewart is related to other HistoryMakers

Social activist, pastor and founder of the Washington, D.C. based House of Imagene Shelter and Women’s Center Bishop Imagene Bigham Stewart was born on January 23, 1942 in Dublin, Georgia.

Stewart arrived in Washington, D.C. in 1963 to participate in the March on Washington for jobs and freedom. After the march, she became ill and never returned home to Georgia. In the mid-1960s, Stewart was homeless and survived by living in Washington, D.C.’s Lincoln Park. She eventually found a job at the Government Printing Office where she worked full-time. Although she was gainfully employed, Stewart never forgot the hardships she faced as a homeless person and was inspired to open her own shelter. She managed to set aside time to organize volunteers and found boarder rooms to house thirty homeless people. Stewart then gained the interest of the late Mayor Walter E. Washington with her plans of opening a shelter, and with a meager budget, she was able to purchase property for the opening of the House of Imagene Shelter and Women’s Center in 1972. That same year, Stewart earned her A.A. degree from the University of the District of Columbia.

The House of Imagene is the first Washington, D.C. based shelter founded by an African American woman. It is comprised of two satellite centers: a shelter for battered women and children, and a shelter that provides temporary housing for homeless veterans and their families.

Stewart went on to become the pastor of the Greater Pearly Gates Baptist Church. She also worked as a radio personality for WOL radio in Washington, D.C. In 1992, Stewart was honored with the prestigious Living Dream Award for her service to battered women and the homeless. In 1993, Stewart served as the National Chaplain for the American Legion Auxiliary and as the director of the United States Department of Veteran Affairs.

Stewart was interviewed by the HistoryMakers on January 30, 2008.

See how Bishop Imagene Stewart is related to other HistoryMakers
Click Here To Explore The Archive Today!