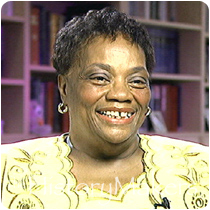 See how Bishop Carolyn Tyler Guidry is related to other HistoryMakers

Bishop Carolyn Tyler Guidry was born in Jackson, Mississippi on August 25, 1935. As a child, she attended St. Matthew Baptist Church for grade school, where eight grade levels were taught in a single classroom. After high school, Tyler Guidry earned her associate’s degree from J.P Campbell College in Jackson, and later studied economics at Tougaloo College. In 1977, she graduated from Los Angeles Bible School and she received her master’s of theology from Fuller Theological Seminary in 2004.

In addition to her ministry, Tyler Guidry has been involved with a number of other organizations. She has served as the secretary of the board of the John F. Kennedy Hospital in Indio, president of the Riverside County Board of Mental Health and treasurer of the national board of One Church One Child, among many other groups. She is also a contributor to the fourth edition of “Those Preaching Women.” Her first husband, Kerry Tyler, passed away in 1988. She and her husband Don Guidry reside in Los Angeles. She has six children, twelve grandchildren and two great-grandchildren.

See how Bishop Carolyn Tyler Guidry is related to other HistoryMakers
Click Here To Explore The Archive Today!