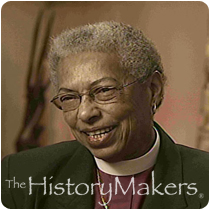 See how Bishop Barbara Harris is related to other HistoryMakers

Bishop Barbara Clementine Harris was born on June 12, 1930 in Philadelphia, Pennsylvania. Harris grew up in Germantown, a neighborhood of Philadelphia. Her mother, Beatrice Price Harris, played the organ for St. Baranabas Church and her father, Walter Harris, was a steel worker. While attending Philadelphia High School for Girls, where she excelled in music, Harris wrote a weekly column called High School Notes by Bobbi for the Philadelphia edition of the Pittsburgh Courier, an African American newspaper. After graduating from high school in 1948, she attended the Charles Morris Price School of Advertising and Journalism. She earned a certificate from Charles Morris Price in 1950. In later years, Harris would study at Villanova University and the Episcopal Divinity School.

As a member of the Episcopal Society for Cultural and Racial Unity (ESCRU) since the late 1950s, Harris served on a number of diocesan committees. In the 1960s, she helped to form the Union of Black Clergy and Laity which was subsequently called the Union of Black Episcopalians (UBE). She was a member of the St. Dismas Fellowship and served on the board of the Pennsylvania Prison Society. During the summer of 1964, Harris volunteered with Delta Ministries in Greenville, Mississippi, educating and registering voters. In 1974, she advocated for the ordination of the “Philadelphia Eleven,” a group of women who had been ordained priests, but were labeled "irregular" by the Anglican Communion. By 1976, the church began to admit women priests and, in October 1980, Harris was ordained as a priest. After her ordination, she served as priest at St. Augustine of Hippo Church and as chaplain of Philadelphia County Prison.

In 1984, Harris was appointed executive director of the Episcopal Church Publishing Company, molding the social direction of the Episcopal Church. Known for her strong advocacy for social justice, Harris was elected in 1988 as the consecrated Suffragan Bishop of the Episcopal Diocese of Massachusetts, becoming the first female bishop in the Anglican Communion. She served as bishop until 2002 when she retired at the age of seventy-two. Harris is the recipient of numerous honors including an honorary degree from Yale University's Divinity School and the 2007 Wisdom Award from the National Visionary Leadership Project. After suffering a stroke in 2010, Harris made a full recovery and still advocates for social change.

Bishop Barbara Harris was interviewed by The HistoryMakers on February 12, 2007.

See how Bishop Barbara Harris is related to other HistoryMakers
Click Here To Explore The Archive Today!