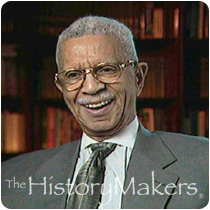 Bishop Arthur M. Brazier, pastor of the Chicago’s Apostolic Church of God, was born in Chicago, Illinois, July 22, 1921. The son of Robert and Geneva Scott Brazier, Brazier grew up on Chicago’s South Side during the Great Depression. Brazier attended Frances E. Willard and Stephen A. Douglas elementary schools; he dropped out of Phillips High School after a year of attendance to begin working. Drafted into a segregated United States Army in 1942, Brazier became a staff sergeant serving in India and Burma; after being discharged in 1945, he met his future wife, was baptized, and joined her church in 1947.

In 1948, Brazier began a twelve year career with the United States Postal Service. During this time, Brazier studied at Moody Bible Institute and became pastor of the Universal Church of Christ in 1952. In 1960, Brazier merged his congregation with the Apostolic Church of God in Chicago’s Woodlawn community. Brazier became the spokesman for the Temporary Woodlawn Organization (TWO), organized by Nicholas Von Hoffman of Sol Alinsky’s Industrial Areas Foundation. Brazier successfully led TWO against the expansion of the University of Chicago in 1963. With Bill Berry of the Chicago Urban League, Brazier also formed the Coordinating Council of Community Organizations which fought segregation in Chicago’s public schools; he resigned in 1965, but was active with Al Raby in Dr. Martin Luther King’s visit to Chicago in 1966.

As pastor of the Apostolic Church of God, Brazier’s congregation grew from 100 members in 1960 to over 18,000. In 1976, Brazier became diocesan bishop of the 6th Episcopal District of the Pentecostal Assemblies of the World. Brazier also founded the Woodlawn Preservation and Investment Corporation, and the Fund for Community Redevelopment and Revitalization; he officially retired from the pulpit and addressed his congregation for the last time on June 1, 2008. In addition to his church activities, Brazier enjoyed a career as a teacher and lecturer and authored Black Self-Determination, Saved By Grace and Grace Alone, and From Milk to Meat. Brazier and his wife Isabelle raised four children.

See how Bishop Arthur Brazier is related to other HistoryMakers
Donate Now
Click Here To Explore The Archive Today!