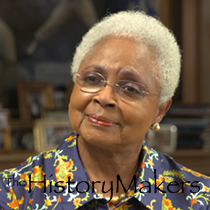 "Help Me To Do Unto Others As I Would Have Them Do Unto Me."

Nonprofit executive and television personality Billye Aaron was born on October 16, 1936 in Anderson County, Texas to Nathan Suber and Annie Mae Smith Suber. She attended Clemons School in Neches, Texas and later graduated from Lincoln High School in Dallas, Texas in 1954. In 1958, she graduated from Texas College in Tyler, Texas with her B.A. degree in English. She received a fellowship to attend Atlanta University in Atlanta, Georgia and graduated with her M.A. degree in 1960. Aaron continued her post-graduate studies at the University of California at Berkeley.

Aaron taught English in the Atlanta public school system, at Spelman College, Morehouse College, South Carolina State College and Morris Brown College. In 1968, she was hired as a co-host for WSB-TV’s ‘Today in Georgia,’ becoming the first African American woman in the southeast to co-host a daily, hour-long talk show. In 1973, she married baseball legend Hank Aaron and began hosting her weekly talk show, ‘Billye,’ for WTMJ-TV. In 1980, she served as the development director for the Atlanta branch of the United Negro College Fund. Throughout her fourteen-year tenure with the organization, she co-hosted the annual telethon, ‘Lou Rawls Parade of Stars,’ co-founded the Mayor’s MASKED Ball and became the second woman in the organization to serve as vice president of the southern region. After retiring in 1994, she and her husband started the Hank Aaron Chasing the Dream Foundation to award scholarships to assist the education of low-income children.

A longtime member of the NAACP, Aaron chaired its premiere fundraiser, the annual Freedom Fund Dinner, for five years. She was named director emeritus of the NAACP Legal Defense Fund and has been honored with numerous awards for her service, including the 2003 Martin Luther King, Jr. “Salute to Greatness” and the YWCA Woman of Achievement award.

Billye Aaron was interviewed by The HistoryMakers on October 1, 2016.