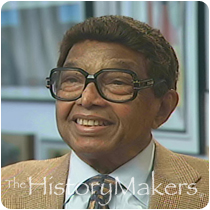 See how Billy Taylor is related to other HistoryMakers
Donate Now

Pianist, composer, and recording artist Billy Taylor was born in Greenville, North Carolina, on July 24, 1921, to a dentist father and schoolteacher mother. As a youth, Taylor and his family moved to Washington, D.C.; it was there that he began to study music. During his teenaged years, Taylor was heavily influenced by the sounds of the Big Bands that were popular. Young Taylor experimenting with many instruments, including drums, guitar and the saxophone, before he found his niche with the study of classical piano. Aside from actively pursing his musical education through independent means, Taylor also remained active in academia, graduating from Virginia State College in 1942 with his B.A. degree in Music.

Taylor moved to New York City in 1944, where he began his professional music career playing piano with Ben Webster's Quartet on 52nd Street. Taylor eventually became the house pianist at the legendary Birdland jazz club, where played alongside musical greats such as Charlie Parker, Dizzy Gillespie, and Miles Davis. Taylor continued on in the New York circuits, until the 1950s, when he began to lead and record with his own trio.

Taylor entered the realm of television in the 1970s, when he took on the role of musical director for The David Frost Show, which broadcast on the U.S. Westinghouse Corporation television stations. In addition to his activities with The David Frost Show, Taylor also acted as the musical director for Tony Brown’s Black Journal Tonight, a weekly show on PBS. Later in his television career, Taylor hosted his own jazz piano show on the Bravo network called Jazz Counterpoint. Despite his forays into visual media, Taylor remained closely tied to the world of audio by hosting a variety of radio both locally in New York, and syndicated nationally by National Public Radio. Perhaps his widest radio audience was reached when Taylor became the arts correspondent for CBS Sunday Morning in the early 1980s.

In addition to becoming a well respected musician of international fame, Taylor also went on to become a successful music educator. Taylor received his Masters and Doctorate degrees in Music Education from the University of Massachusetts at Amherst, and went on to serve as the Duke Ellington Fellow at Yale University. Subsequent to these academic achievements, Taylor received several honorary doctoral degrees over the course of his career.

Recipient of numerous awards and appointments throughout his career, Taylor became one of only three jazz musicians at the time to be appointed to the National Council of the Arts. In addition to serving on the National Council of the Arts, Taylor was also appointed the artistic advisor on jazz for the Kennedy Center for the Performing Arts, where he developed a run of widely acclaimed series, including the Louis Armstrong Legacy series, and the annual Mary Lou Williams Women in Jazz Festival.

For his performances and professional activities, Taylor received two Peabody Awards; an Emmy; a Grammy; and a place in the Hall of Fame for the International Association of Jazz Educators. At the time of his interview in 2005, Taylor was still professionally active; touring and recording with his Trio, playing concert dates, appearing in television and radio engagements, writing music, and lecturing.

See how Billy Taylor is related to other HistoryMakers
Donate Now
Click Here To Explore The Archive Today!