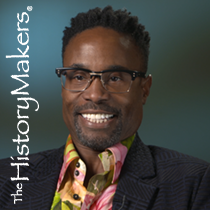 Actor Billy Porter was born on September 21, 1969 in Pittsburgh, Pennsylvania, and raised by his mother, Cloerinda Ford. Porter attended Taylor Allderdice High School in Pittsburgh, as well as the Pittsburgh School for the Creative and Performing Arts, where he studied acting, music, and dance. He later attended Carnegie Mellon University’s School of Drama in Pittsburgh, graduating in 1991.

In 1991, Porter was cast in the ensemble of Miss Saigon, which won three Tony Awards and became one of the longest-running shows in Broadway history. Throughout the 1990s, he continued to appear in Broadway musicals, including Five Guys Named Moe, Smokey Joe’s Café, and the 1994 revival of Grease, in which he played Teen Angel. Porter pursued a career in the music industry, winning the 1992 season of the talent competition Star Search and releasing a self-titled R&B album in 1997 with A&M Records. Starting in 2000, he took a hiatus from acting on Broadway to direct productions like the music revue Being Alive at the Suzanne Roberts Theatre in Philadelphia, Pennsylvania, the Los Angeles staging of Once on This Island, and a revival of George C. Wolfe’s play, The Colored Museum. Porter wrote the solo performance piece Ghetto Superstar, which he debuted in 2005 at New York City’s Public Theatre. Porter went on to appear in the Pittsburgh premiere of Suzan-Lori Parks’ Topdog/Underdog, as well as in the off-Broadway revival of Angels in America at the Signature Theatre in New York City in 2010, where he played Belize.

In 2013, Porter returned to Broadway as Lola in the musical Kinky Boots, winning the 2013 Tony Award for Best Actor in a Musical, the Drama Desk Award for Outstanding Actor in a Musical, and the 2014 Grammy Award for Best Musical Theater Album for his performance. In the years following, Porter wrote the semi-autobiographical play While I Yet Live, which premiered at Primary Stages in New York City in 2014, and played Aubrey Lyles in the 2016 Broadway musical Shuffle Along, or the Making of the Musical Sensation of 1921 and All That Followed. In 2018, Porter became a series regular in the television show Pose, and appeared on multiple episodes of American Horror Story: Apocalypse. He was a supporter and fundraiser for the Ali Forney Center, a community center for homeless LGBT youth in New York City.

Billy Porter was interviewed by The HistoryMakers on October 7, 2016.