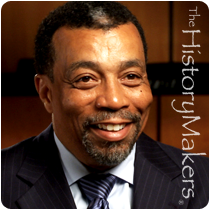 See how Billy Martin is related to other HistoryMakers

In 1990, Martin began his private practice as a partner with Eckert Seamans in Pittsburgh, Pennsylvania, which represented all three major Pittsburgh sports franchises. It was at this time that Martin got his start defending famous athletes, and it was at this time that the late Johnny Cochrane became Martin’s mentor. In 1993, Martin defended NBA star Allen Iverson, before moving to the firm of William R. Martin & Associates in Washington, D.C. a year later. From 1997 to 2000, Martin worked as a partner in the litigation department of Manatt Phelps & Phillips, and in 1998, he defended Monica Lewinsky and her mother, Marcia Lewis, during President Clinton’s impeachment proceedings. He managed block a second grand jury appearance by Lewis and obtain an offer of blanket immunity for Lewinsky. In 2000, Martin moved to the firm of Dyer Ellis & Joseph, which merged with Blank Rome in 2003. While at the firm, Martin defended Chandra Levy’s parents in 2002, former NBA player Jayson Williams in 2004, and former Atlanta mayor Bill Campbell in 2004. From 2007 to 2009, Martin led the white-collar criminal defense group at Sutherland Asbill & Brennan, where in 2007 he defended football player Michael Vick on his dog fighting charges, and in 2008 he represented Senator Larry Craig in his effort to overturn his disorderly conduct conviction. In addition to his celebrity clients, however, Martin also worked to defend Fortune 500 companies. In May 2009, Martin joined Howrey LLP in their Washington, D.C. office, where he heads the White Collar Criminal Defense Practice.

Ranked fourth in The Washingtonian’s list of “Top Lawyers” and selected as one of the National Law Journal’s “50 Most Influential Minority Attorneys,” Martin is the recipient of the Distinguished Alumni Award from both Howard University and University of Cincinnati College of Law. Martin currently lives in Washington, DC, with his children and wife, Michel Martin, an Emmy Award winning American journalist and correspondent for ABC News and National Public Radio.

Billy Martin was interviewed by The HistoryMakers on June 25, 2010.

See how Billy Martin is related to other HistoryMakers
Click Here To Explore The Archive Today!