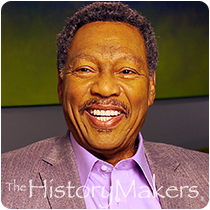 See how Billy Davis, Jr. is related to other HistoryMakers

Singer Billy Davis, Jr. was born on June 26, 1938 in St. Louis, Missouri to William Davis, Sr. and Norris Wilbur. Davis started singing in gospel choirs at an early age. He attended Washington Technical High School in St. Louis and sang with a band called the Emeralds. In 1958, Davis and his father opened a nightclub, where he worked and performed music. In 1961, he was drafted into the United States Army and formed another band, The Kingsmen, while stationed in Germany.

In 1965, Davis moved to Los Angeles, California seeking a recording opportunity with Motown Records. While waiting for his chance to go into the studio with one of their producers, he and friend Lamonte McLemore decided to start a singing group as a hobby. The Versatiles was formed, which included Davis, McLemore, Marilyn McCoo, Florence LaRue, and Ron Townson. The group signed to the Soul City label, changed their name to The 5th Dimension, and recorded their first hit in 1966, "Go Where You Wanna Go." In 1967, they released “Up, Up, and Away,” which won four Grammy Awards and was the title track to The 5th Dimension's first hit album. In 1969, The 5th Dimension released The Age of Aquarius. The album's first single, "Aquarius/Let the Sunshine In," became a mega-hit and occupied the number one spot on the charts for six weeks. It earned the group two more Grammy Awards, including Record of the Year.

In 1969, Davis married bandmate Marilyn McCoo, and in 1975, they left The 5th Dimension. Together, they released 1976's I Hope We Get To Love In Time, featuring the single, "You Don't Have to Be a Star (To Be in My Show)." The song went straight to number one on the Billboard Hot 100 and earned the duo a Grammy Award for Best R&B Performance by a Duo, Group or Chorus. Davis and McCoo went on to host The Marilyn McCoo & Billy Davis Jr. Show on CBS in 1977.

In 1982, Davis returned to the studio and recorded a solo gospel album called Let Me Have a Dream, which was co-produced by the world-renown Gospel artist, the Rev. James Cleveland. In the 1990s, he continued to sing and explored a career in musical theatre, starring in Dreamgirls in North Carolina in 1993, and Blues in the Night, at the Old Globe Theater in San Diego, California in 1994. He later founded the Soldiers For the Second Coming Music Ministry and co-authored the book Up, Up and Away…How We Found Love, Faith and Lasting Marriage in the Entertainment World with McCoo in 2004.

Davis has also earned a star on the Hollywood Walk of Fame, and The 5th Dimension was inducted into the Vocal Group Hall of Fame in 2002. He received an honorary doctorate degree from the University of Maryland Eastern Shore in 2012.

Billy Davis, Jr. was interviewed by The HistoryMakers on July 29, 2014.

See how Billy Davis, Jr. is related to other HistoryMakers
Click Here To Explore The Archive Today!