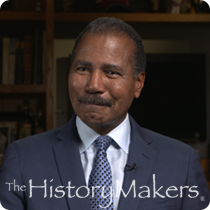 See how Bill Whitaker is related to other HistoryMakers

Broadcast journalist Bill Whitaker was born on August 26, 1951, in Philadelphia, Pennsylvania to Marie and William Whitaker, and raised in Media, Pennsylvania. He attended Media Elementary School and Media Junior High. Whitaker graduated from Penncrest High School in 1969. Whitaker went on to earn his B.A. degree in American history from the Hobart and William Smith Colleges in Geneva, New York in 1973. He then graduated with his M.A. degree in African American studies from Boston University in 1974 and enrolled in the Master of Journalism program the University of California, Berkeley.

Whitaker began his journalism career in 1979, serving as a news producer, researcher, and writer for KQED, a public television station in San Francisco. His first reporting job was with the CBS affiliate WBTV-TV in Charlotte, North Carolina, where he covered the contentious 1984 senate race between Jim Hunt and Jesse Helms. Whitaker was hired as a reporter at CBS News that same year and was based in Atlanta, Georgia, where he covered the 1988 presidential campaign of Michael Dukakis. The following year, Whitaker became the CBS News Tokyo correspondent, covering stories throughout Asia, including the 1989 Tiananmen Square protests. He was relocated to Los Angeles to serve as a regular reporter for CBS Evening News in 1992, and appeared in other CBS programs like Sunday Morning and The Early Show. He was CBS News’ lead reporter covering President George W. Bush’s 2000 campaign and also covered Mitt Romney’s 2008 campaign. Whitaker became a correspondent for the CBS newsmagazine 60 Minutes in 2014.

Whitaker has received many awards and honors, including honorary degrees from the Hobart and William Smith College in 1997 and Knox College in 2015. He was awarded the News & Documentary Emmy Award for Outstanding Business and Economic Reporting in a News Magazine from the National Academy of Arts and Sciences, an Excellence Award from the National Association of Black Journalists, and the Leonard Zeidenberg First Amendment Award from the Radio Television Digital News Association. He also won an Emmy in 1988 for his coverage of the demise of Jim and Tammy Bakker’s television ministry

Whitaker and his wife, Terry, have two children, William and Lesley.

Bill Whitaker was interviewed by The HistoryMakers on January 18, 2017.

See how Bill Whitaker is related to other HistoryMakers