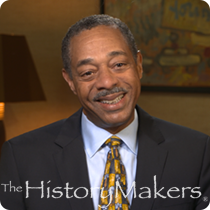 See how Bill Parker is related to other HistoryMakers
Donate Now

Entrepreneur Bill Parker was born on February 13, 1955 in Newark, New Jersey to William Parker and Beryl Parker. He attended Tremont Avenue Elementary School in Orange, New Jersey and Orange High School, where he graduated from in 1972. Parker earned his B.A. degree in economics from Denison University in Granville, Ohio in 1976, and received his M.B.A. degree in business and public administration from Southeastern University in Lakeland, Florida in 2002.

Parker began his career as a job analyst in the labor relations department at Potomac Electric Power Company in 1976 and served in that position until 1981. He then joined Xerox Corporation’s sales and marketing group and remained there until 1984, when he was hired by Motorola and worked in its sales and customer service department. That same year, Parker co-founded Washington Cable Supply, Inc. with his wife, Beverly, and served as its chief executive officer and president. The company was named by USA Today as the seventh largest African American owned company in the United States and was consistently listed on the Black Enterprise “Be Industrial/Service 100” list for more than a decade. Their clients included Fortune 500 companies such as AT&T, Bell South, Verizon, and Lucent.

Parker was featured on Black Enterprise’s “Top 100” list from 1992 through 1999, and was featured in the magazine’s “New Power Generation” issue in 1999. He was also awarded a citation from Denison University in 2001, the 12 Good Men Award from McDonald’s in 2006, and the Pleasures of the Palate Award from the Diabetes Research Institute in 2009. In 1997, Parker was featured on the cover of Fortune magazine’s April issue. He was named the “Supplier of the Year” by ATT, Alcatel-Lucent, and Potomac Electric Power Company as well.

Parker served on the board of directors for the Orange Bowl Committee, Camillus House, Kemp-Parker Family Foundation, the Miami Art Museum, and the Y.M.C.A. of Metropolitan Washington, D.C. He also served as chair of Capital Commitment, Inc. In 2009, Parker served as a founding trustee of the 2009 Miami Wine and Food Festival.

Bill Parker was interviewed by The HistoryMakers on March 8, 2017.

See how Bill Parker is related to other HistoryMakers
Donate Now