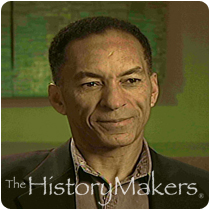 Favorite Food:
Soul Food
Favorite Time of Year:
All Seasons
Favorite Quote:
If You Didn't Know How Old You Was, How Old Would You Be?

Favorite Food:
Soul Food
Favorite Time of Year:
All Seasons
Favorite Quote:
If You Didn't Know How Old You Was, How Old Would You Be?

See how Bill Overton is related to other HistoryMakers
Donate Now

Actor Bill Overton was born in Boston, Massachusetts, and was raised by his mother and stepfather, Hessie and Eugene Waterhouse. As a child, Overton attended Boston’s Asa Gray Elementary, W.L.P. Boardman Elementary, Henry L. Higginson Elementary and Lewis Junior High Schools. As an adolescent, Overton was a premiere athlete and member of his school’s football and basketball teams. He attended the historical Boston English High School where he was voted vice president of his senior class.

Overton went on to attend one of Nebraska’s junior colleges and established himself as one his era’s phenomenal football players. His display of athletic talent at the junior college level earned him a full scholarship to attend Wake Forest University. Overton graduated in 1968 as a speech and drama major, and that same year, he was drafted by the NFL’s Dallas Cowboys. In 1969, he was traded to the Kansas City Chiefs and the following year, he began playing for the Canadian Football League. Then, in 1970, Overton moved back to Boston and worked as a sports agent for Pro Sports, Inc. While there, he was instrumental in the company’s signing of four-time Pro Bowler Raymond Chester, and worked to ensure fair contracts for African American football players.

In 1971, Overton began a career in modeling and was hired for various advertising agencies including Black Beauty and Ford modeling agencies. He helped to launch ad campaigns for Hanes, Benson and Hedges, Canadian Mist, Sears, and Montgomery Ward. During the 1970s, Overton also began appearing in television commercials. He honed his acting skills by enrolling at the Lee Strasberg Institute in New York City and was mentored by actor Woody Strode. Overton starred in several films throughout the mid-1970s, often appearing in roles that required him to demonstrate his athleticism. He was featured in episodes of the New Perry Mason series, Firehouse and the films Cover Girl and Invisible Strangler. Then, in 1981, he starred alongside Harry Belafonte and LeVar Burton in the film Grambling’s White Tigers.

Overton married award winning actress Jayne Kennedy in 1985. He continued to make television appearances throughout the 1980s and 1990s, starring in classic sitcoms such as The Red Foxx Show, 227, and The Fresh Prince of Bel Air.

In 2002, Overton published The Media: Shaping an Image of a People. He lives in Los Angeles, California with his wife and three daughters.

See how Bill Overton is related to other HistoryMakers
Donate Now
Click Here To Explore The Archive Today!