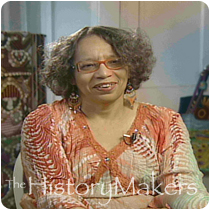 Favorite Color:
Orange
Favorite Food:
Lobster, Seafood
Favorite Time of Year:
April
Favorite Vacation Spot:
New Mexico, Italy
Favorite Quote:
I Freed A Thousand Slaves And I Would Have Freed Many, Many More If They Knew They Were Slaves.

Favorite Color:
Orange
Favorite Food:
Lobster, Seafood
Favorite Time of Year:
April
Favorite Vacation Spot:
New Mexico, Italy
Favorite Quote:
I Freed A Thousand Slaves And I Would Have Freed Many, Many More If They Knew They Were Slaves.

See how Beverly Guy-Sheftall is related to other HistoryMakers

Academic administrator and black women's studies professor Beverly Guy-Sheftall was born on June 1, 1946 in Memphis, Tennessee to Walter and Ernestine Varnado-Guy. Reared by her mother, who supported her three daughters by teaching math and later, working as an accountant, Guy-Sheftall was taught to work hard on her studies and to prepare for an independent, productive adulthood. Guy-Sheftall graduated with honors from Manassas High School in 1962, at the age of sixteen. That same year, she entered Spelman College in Atlanta, Georgia. There, Guy-Sheftall majored in English and minored in secondary education. After earning her B.A. degree in 1966, she moved on to Wellesley College for further study. Guy-Sheftall completed her M.A. degree requirements at Atlanta University in 1970.

In 1971, Guy-Sheftall returned to Spelman College as an English professor. She decided to help broaden the Women’s Studies Movement to include issues pertinent to African Americans. Guy-Sheftall began editing books of literature by African American women and publishing articles about black feminism. Her doctoral dissertation was titled “Daughters of Sorrow: Attitudes toward Black Women, 1880-1920”. Rarely are dissertations published in quantity, but Guy-Sheftall’s was, appearing in 1991 as a volume in the series Black Women in United States History. She received her Ph.D. in 1977 from Emory University. Two years later, Guy-Sheftall co-edited Sturdy Black Bridges: Visions of Black Women in Literature, the first anthology of African American women’s writings.

In the early 1980s, Guy-Sheftall helped to establish two seminal resources for Black Women’s Studies. The first was Spelman College’s Women’s Research and Resource Center which she founded and served as the director for over two decades. The second was the periodical SAGE: A Scholarly Journal on Black Women, which Guy-Sheftall co-founded with Patricia Bell-Scott. Her other books include Double Stitch: Black Women Write about Mothers & Daughters, which she co-edited with Bell-Scott; Words of Fire: An Anthology of African-American Feminist Thought and Gender Talk, which she co-authored with former Spelman College president Johnnetta B.Cole.

As a testament to her intellectual prowess, Guy-Sheftall was awarded Spelman’s Presidential Faculty Award for Outstanding Scholarship. She was also named to the Anna Julia Cooper Professorship, an endowed chair in the English Department that honors the daughter of a slave who earned a doctorate degree from the Sorbonne, in Paris. In addition to these accolades, Guy-Sheftall was a recipient of the Kellogg and Woodrow Wilson Fellowships.

Beverly Guy-Sheftall was interviewed by The HistoryMakers on September 11, 2007.

See how Beverly Guy-Sheftall is related to other HistoryMakers
Click Here To Explore The Archive Today!