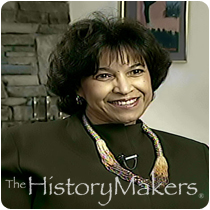 See how Beverly E. Smith is related to other HistoryMakers

Corporate chief executive Beverly Ann Evans Smith was born April 12, 1948 in Massillon, Ohio to Louie Edward and Willimae Dumas Evans. After receiving her diploma from all girls Central Catholic High School, Canton, Ohio in 1966, she attended and graduated from Bowling Green State University in 1970 with a B.S. in education. Smith earned her M. Ed. degree in education in 1973 from Kent State University.

While still in graduate school, Smith taught high school speech and english for a year. From 1972 to 1974, she was Assistant Director for Student Financial Aid at Kent State University, and from 1974 to 1976, Smith worked as the Assistant Director, Upward Bound at Kent State. She was the Assistant Dean for Student Life for Georgia State University from 1976 to 1978. Smith worked as Manager of Business Services for Southern Bell Telephone Company from 1978 to 1983. From 1984 to 1996, she was employed by the Network Services Division of AT&T in Atlanta, Georgia, where she worked primarily as a District Manager in varied operations functions. From 1988 to 1990, Smith was a loaned executive from AT&T, serving as Executive Director for Delta Sigma Theta Sorority, Inc. Upon her retirement in 1996, she and her husband established The HR Group, Inc. of Marietta, Georgia, a small business management consulting company with clients from Fortune 500 companies to small business organizations.

Smith regularly serves as a trainer and workshop facilitator in leadership development and strategic planning for non-profits and church groups. Her civic duties include being a member of the National Association of African Americans in Human Resources. Smith is Chair of Cobb County Georgia Board of Elections and Registration and a member of the Board of Directors of Chattahoochee Technical College. A member of Cobb Executive Women, Smith is a 1988 graduate of Leadership Cobb.

See how Beverly E. Smith is related to other HistoryMakers
Click Here To Explore The Archive Today!