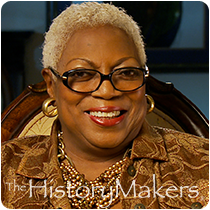 See how Bev Smith is related to other HistoryMakers

Radio talk show host Bev Smith was born March 4, 1943 in Pittsburgh, Pennsylvania. Smith is the eldest of six children born to Isabel and John Sloan. She was raised in the Homewood neighborhood of Pennsylvania, and graduated from Westinghouse High School. In 1961, Smith entered beautician school, to raise money for college, and a year later enrolled in Clark’s Business School. In 1963, she took classes at Robert Morris Junior College.

In 1969, Smith was appointed office manager for the National Conference of Christians and Jews, under Ralph King. In 1971, she was named Pittsburgh’s first African American consumer affairs investigative reporter for WPXI Television. She was then hired as news and public affairs director for Sheridan Broadcasting in 1975, and hosted a talk show on Sheridan's flagship station, WAMO. In 1977, Smith became the director of consumer affairs, as well as energy coordinator of her county in Pennsylvania. That same year, she moved her radio show to KDKA, where she also hosted a television show called Vibrations. Smith then became a radio host for Miami’s WGBS (now WNMS) in 1979, and Orlando’s WKIS in 1985. In 1988, Smith began hosting a local radio program in Washington D.C., as well as the national Black Entertainment Television talk show "Our Voices," which she hosted for over thirteen years.

In 1998, Smith became the host of "The Bev Smith Show," on American Urban Radio Networks, which made her the only African American female radio talk show host with a nationally syndicated show in the country. Smith signed off the air as host of her show in 2011.

Smith has received nearly 300 awards and recognitions for her contributions to radio and television, including the Spirit of Democracy Award, the Radio Air Crystal Award and the prestigious Max Robinson Award. She has also been selected by Talkers magazine as one of the most important radio talk show hosts in America.

Bev Smith was interviewed by The HistoryMakers on June 9, 2014.

See how Bev Smith is related to other HistoryMakers
Click Here To Explore The Archive Today!