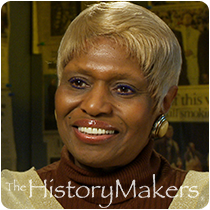 See how Bev Johnson is related to other HistoryMakers

Radio talk show host Beverly Elaine Johnson was born on May 10, 1953 in Memphis, Tennessee to William Van and Julia Danner Johnson. She was raised in Ann Arbor, Michigan and attended public schools. Johnson received her B.A. degree in English literature from Rust College in Holly Springs, Mississippi, and her M.S. degree in educational media technology from Jackson State University. She also graduated from Southwest Tennessee Community College's Substance Abuse Program and The Drug Court Institute, and went on to intern with the Shelby County Drug Court.

Johnson's broadcast career began in Jackson, Mississippi in 1976. In 1983, she was hired at the WDIA radio station in Memphis, Tennessee. She has worked in a number of roles, including as disc jockey to public service director to news/community affairs director, programming assistant, marketing assistant, and talk show host. Johnson was appointed as anchor/talk show host for WDIA, and hosts "The Bev Johnson Show," which first aired in 1987. She is also co-owner of Heart 2 Heart Collaborations Counseling Services, and hosts a cable television show on Comcast Cable titled "Affairs of the Heart." In addition, she teaches at Southwest Tennessee Community College as an instructor of speech and fine arts and language and literature, and has taught radio broadcasting at Rust College for a number of years.

Johnson served on the boards of the Rock N Soul Museum, Memphis-area Planned Parenthood and the National Black Programmers Coalition. She has chaired the Memphis Branch of the NAACP's Radio-thon, and auctioneered for the Coalition of 100 Black Women Memphis Chapter's Annual Eligible Bachelor auction fundraiser, as well as WKNO's Action Auction. She is a charter member of Shelby County Alumnae Chapter of Delta Sigma Theta Sorority Incorporated, and was 2nd Vice President for two years. Johnson is also a member of Mt. Pisgah C.M.E. church.

Johnson received the UNCF Outstanding Alumnus Award in 1996. She was named the 1989, 1991, 1992 and 1996 News/Public Affairs Director of the Year by the National Black Programmers Coalition, and was a 1993, 1994 and 1995 nominee for The National Association of Broadcaster's Marconi Award, Personality of the Year. Johnson was also the 1996 Billboard Award Personality of the Year, and was honored by the Tennessee General Assembly's House of Representatives for her tenth and twentieth year hosting "The Bev Johnson Show" talk show. She was named the Memphis Music Commission’s 2013 Emissaries of Memphis Music and received the Jus Blues Foundation 2013 Jack “The Rapper” Gibson Radio Pioneer Award.

Bev Johnson was interviewed by The HistoryMakers on April 25, 2014.

See how Bev Johnson is related to other HistoryMakers
Click Here To Explore The Archive Today!