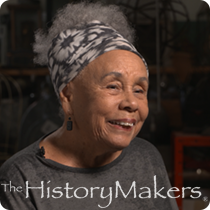 See how Betye Saar is related to other HistoryMakers

Visual artist Betye Saar was born on July 20, 1926 in Los Angeles, California to Jefferson Maze Brown and Beatrice Lillian Parson. After the passing of her father in 1931, Saar and her family moved to Pasadena, California to live with her great-aunt, Hattie Parson Keys. Saar earned her B.A. degree in design, with a minor in sociology, from the University of California, Los Angeles in 1949. She later took graduate level classes in design at multiple institutions in California, but changed her artistic focus after taking a printmaking class.

After graduating from the University of California, Saar briefly worked as a social worker until she met jewelry artist Curtis Tann. She began making assemblages in 1967. After being inspired by the Watts Riots, an exhibit by Joseph Cornell, and the assassination of Dr. Martin Luther King Jr., Saar began making politically themed artwork. Her first and most well-known piece, was The Liberation of Aunt Jemima. Throughout her artistic career, Saar’s artwork has been displayed at prominent art museums. In 1975, she held her first solo show at the Whitney Museum of Art in New York and was the first African American woman to have her art on display there. The following year, Saar participated in her first commercial gallery show at the Monique Knowlton Gallery in New York.

Saar has won many awards for her artwork throughout her career. She received two National Endowment for the Arts Awards, in 1974 and 1984. Saar also received the J. Paul Getty Fund for the Visual Arts Fellowship, the Artist Award from the Studio Museum in Harlem in 1990, as well as the Distinguished Artist Award from Fresno Art Museum in 1993, and the Flintridge Foundation Visual Artists Award. In 1994, Saar represented the U.S. at the 22nd Biennial of Sao Paulo in Brazil. In 2005, the University of Michigan Museum of Art organized the traveling exhibition Betye Saar: Extending the Frozen Moment which examined her incorporation of photographic fragments in her work. In 2008, she was recognized for her career in art and community activism and was awarded the Lifetime Achievement Award in Fine Arts from the Congressional Black Caucus.

Betye Saar was interviewed by The HistoryMakers on July 19, 2017.

See how Betye Saar is related to other HistoryMakers