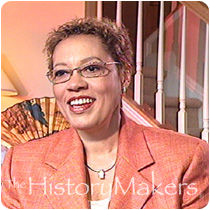 See how Betty Francis is related to other HistoryMakers

Government lawyer and state government administrator Betty Hager Francis was born and raised in Washington, D.C. Her father, William Henry Hager, was a supply clerk for the United States Department of Treasury and a part-time carpenter, while her mother, Helen Brown Hager, was a homemaker and owner of a catering business. Francis and her siblings were raised in a devout Catholic home. Her childhood neighborhood exposed her to prominent African Americans such as Charles Houston and Edward Brooke, III, whose niece, Peggy Amos, was Francis’ best friend. In 1963, Francis graduated from high school at the Sacred Heart Academy where she headed the student council.

Francis attended Howard University on a four-year academic scholarship while also working in the Capitol Hill office of Indiana Senator Birch Bayh. She took a year off from college to work on the 1966 United States Senate campaign of Edward Brooke, III in Boston, Massachusetts. Francis got married shortly before graduating from Howard with her B.A. degree in political science in 1967. She then returned to Boston to work at Harvard University's Astrological Observatory. In 1971, she began working at the Harvard University Press, where her boss persuaded her to go to law school. She attended Suffolk University Law School at night, earning her J.D. degree in 1980.

From 1980 to 1981, Francis worked on family and probate cases as an attorney for Greater Boston Legal Services. She then worked at the Boston Housing Authority where she handled landlord-tenant disputes, civil rights issues and labor and personnel cases. In 1984, she was appointed Deputy Chief Counsel for the Massachusetts Department of Public Works. Three years later then-Governor Michael Dukakis appointed her Associate Commissioner of Massachusetts Department of Public Works. Francis directed the maintenance and operation of roads and bridges and worked on a variety of other transportation issues, including the multi-billion dollar project to build the Central Artery/Third Harbor Tunnel (also known as "The Big Dig"). She also served as Chief Administrative Law Judge in that agency. Francis was elected the first President of the Northeast Association of State Transportation Officials, serving from 1988-1994.

In 1991, Washington, D.C. Mayor Sharon Pratt Kelly appointed Francis as Director of Public Works, making her the first woman to hold this position. She received particular recognition for improvements to vehicle registration and parking management; for the initiation of curbside recycling; and for the successful reengineering and delivery of snow removal services within the District. Francis was named Director of Prince George's County, Maryland's Department of Public Works and Transportation in 1995. She was the first African American and the first woman to hold the position in the County's history. She led a dramatic increase in capital investment in the County’s transportation infrastructure, the development of its regional and community-based transit services and significant improvements in land development and emergency response operations. She served in this post until 2004. Francis has three children and two grandchildren.

Betty Francis was interviewed by The HistoryMakers on May 18, 2004.

See how Betty Francis is related to other HistoryMakers
Click Here To Explore The Archive Today!