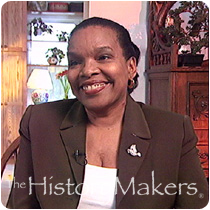 See how Betty Currie is related to other HistoryMakers
Donate Now

Retiring from government service in 1984, Currie volunteered for Operation Rescue, the United Way, the Commission on the Status of Women, and Rainbow Christian Services. Currie also volunteered for the failed Democratic presidential campaigns of Mondale/Ferraro in 1984 and the Dukakis/Bentsen ticket of 1988. She hesitantly joined the Clinton/Gore campaign in Little Rock, Arkansas, in 1991, where she served with James Carville in the “war room”.

Following Bill Clinton’s 1992 election to the presidency, Currie was chosen to serve as his personal secretary in the White House. She served throughout both of Clinton’s terms. In this capacity, Currie coordinated the Presidents communications including phone calls, letters, e-mails, coordinating appointments and greeted all visitors. Meeting heroes like Nelson Mandela and Rosa Parks compensated for the long hours. In 1997, Currie testified before the special prosecutor’s investigation of the Clinton/Lewinsky affair amidst a frenzy of media attention. Described by journalist and colleagues as truthful, she still retains her association with the Clinton family.

Currie, finally retired at the time of her interview, lives in suburban Maryland with her husband and “Socks”, Chelsea Clinton’s White House cat. She has a grown daughter.

See how Betty Currie is related to other HistoryMakers
Donate Now
Click Here To Explore The Archive Today!