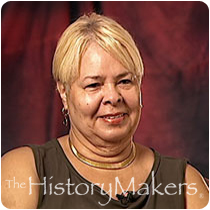 Favorite Food:
Gumbo
Favorite Vacation Spot:
Caribbean
Favorite Quote:
What you see, is what you get

Favorite Food:
Gumbo
Favorite Vacation Spot:
Caribbean
Favorite Quote:
What you see, is what you get

See how Bettiann Gardner is related to other HistoryMakers
Donate Now

Hair care manufacturer Bettiann Gardner was born in Chicago, Illinois. Gardner Working with her husband and business partner, Edward, Bettiann Gardner became an innovator in African American hair care when she co-founded Soft Sheen Products, Inc. in 1964. Soft Sheen Products began in the couple's basement in Chicago; their goal was to create better hair care products designed specifically for African Americans. With brands such as Optimum and Care Free Curl, Soft Sheen Products grew into a multimillion-dollar enterprise employing over four hundred Chicagoans. Exporting to Canada, the Caribbean, and West Africa, the company became a global force, eventually being purchased by the L'Oreal group in 1998.

From the beginning of her business activities, Gardner saw to it that each of her children were also involved in Soft Sheen Products. A staunch advocate of the arts and African American theater, Gardner helped to revitalize the old Regal Theater by contributing millions toward the purchase of the once-dormant Avalon Theater in 1987. As further testament to her commitment to the arts, Gardner also supported the New Regal Theater Foundation, and acted as chairwoman of the Chicago Sinfonietta's honorary board of directors.

Gardner and Edward, her husband of over fifty years, raised four children.

See how Bettiann Gardner is related to other HistoryMakers
Donate Now
Click Here To Explore The Archive Today!