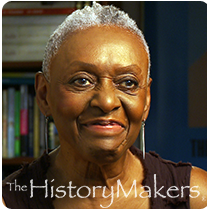 See how Bethann Hardison is related to other HistoryMakers
Donate Now

Fashion activist and model Bethann Hardison was born in Brooklyn, New York. After graduating from George W. Wingate High School, Hardison attended the New York University Art School and the Fashion Institute of Technology. During the 1960s, Hardison worked in the garment district of New York City as saleswoman. In 1967, she was discovered by African American designer Willi Smith and began working for Smith as a fitting model, soon crossing over to the runway and print industries. Along with Beverly Johnson, Iman, and Pat Cleveland; Hardison broke barriers in the 1970s appearing in Allure, Harper’s Bazarre, and Vogue. In 1973, she was featured in the international Versailles fashion face off, a historical moment in which France’s best designers competed against the top American designers of the time. Hardison then joined Click, a startup modeling agency, in 1980, as a booking agent where she produced fashion shows, handled public relations for design houses, and became a contributing editor at several magazines. Concerned with the politics of the fashion industry, Hardison changed her focus from modeling to activism in 1981.

Formed in 1984, the Bethann Management Agency focused on diversifying the fashion industry. Also, along with former model and friend Iman, Hardison co-founded the Black Girls Coalition in 1988 to provide advocacy and support to African American models. In 1996, Hardison turned her attention towards television where she co-executive produced television sitcoms “Between Brothers” and “Livin Large.” Hardison was also named Vogue Italia editor at large in 2010.

Hardison’s contributions in modeling and advocacy have earned her several awards throughout her career. In April of 1999, she was honored with the First Annual Vibe Style Lifetime Achievement Award. Later that year, the Magic Johnson Foundation presented Hardison with a Distinguished Service Award. The Black Alumni of the Pratt Institute honored Hardison with a 2003 Lifetime Achievement award. In 2012, she received a Woman of Power Legacy Award from Black Enterprise, and became a Frederick Douglass award recipient in 2013, for her work in promoting diversity in fashion.

Bethann Hardison was interviewed by The HistoryMakers on July 15, 2013.

See how Bethann Hardison is related to other HistoryMakers
Donate Now
Click Here To Explore The Archive Today!