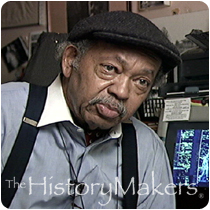 See how Bertrand Miles is related to other HistoryMakers

Photographer Bertrand Henry Miles was born September 17, 1928 in Fort Adams, Mississippi. His mother, Irma Mazique Miles, was from a family of medical doctors with roots on the island of Martinique. Young Miles grew up on the move. Sometimes living with his father, he attended school in Woodeville, Vidalia, Louisiana, and McCosh Elementary in Chicago. In Natchez, Mississippi he attended Broomfield High School, but graduated from Englewood High School in Chicago in 1948. Introduced to photography in high school, Miles was taught by professional photographers Carl Maynard and Carl Adair; eventually becoming Adair's assistant and moving with him to Atlanta, Georgia. Parting ways with Adair, Miles ran a “jook” for his father in Crosby, Mississippi through 1950.

Returning to Chicago, Miles helped in the family owned Billy's Restaurant and freelanced his photography. In 1952, he was offered a full time position by John H. Johnson as staff photographer for the New York City bureau of Johnson Publishing Company. Photographs by Miles appeared in Negro Digest, Ebony and Jet magazines. In 1953, Miles resigned from Johnson and recommended Moneta Sleet to fill his position. As a freelancer on Madison Avenue, he was able to publish photos in Life Magazine, Look Magazine and other publications. In 1968, Miles was hired as a cameraman by CBS Television, where he served until 1977. Miles is known for his portrait of Adam Clayton Powell, and his award-winning portrait of Mary Church Terrell at the Frederick Douglass Home at Cedar Hill.

For thirty-six years, including seven on the executive board, Miles was a member of local #600 of the International Alliance of Theatrical Stage Employees, Moving Picture Technicians, Artists and Allied Crafts and its allied sister union local #52. After retiring, Miles headed up the Miles Group, Inc., which was concerned with the restoration of the cultural history of Harlem and providing training and jobs for youth.

See how Bertrand Miles is related to other HistoryMakers
Click Here To Explore The Archive Today!