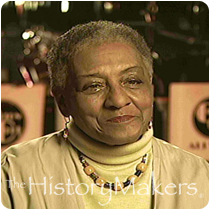 See how Bertha Hope is related to other HistoryMakers

In her youth, Hope-Booker played music with and learned from other young musicians in her neighborhood. Some of them became famous later, including Richie Powell and Elmo Hope, the latter becoming her husband in 1957. She moved with Elmo Hope to the Bronx, New York, where she worked at a telephone company during the day while performing at night. After her husband’s passing in 1967, she continued to present his music and remained an active force in improvised music within the New York jazz scene. Hope-Booker served as an artist-in-residence under the auspices of the New Jersey State Council on the Arts. Through this program, she performed in statewide New Jersey music workshops with Dizzy Gillespie, Frank Foster, Nat Adderley and Philly Joe Jones.

Hope-Booker later married Walter Booker, Jr., and the two worked to keep the music of Elmo Hope alive through Hope-Booker’s tribute ensemble called ELMOllenium and The Elmo Hope Project. She also plays with another group, Jazzberry Jam. In addition, Hope-Booker is the leader of The Bertha Hope Trio, which has toured extensively throughout Japan. She is a composer and arranger with several recordings under her name, including In Search of Hope and Elmo’s Fire (Steeplechase); Between Two Kings (Minor Records) and her latest on the Reservoir label, Nothin’ But Love. Hope-Booker has also taught an advanced jazz ensemble at The Lucy Moses School and an Introduction to Jazz program at Washington Irving High School in New York City, which was sponsored by Bette Midler. The Seattle-based trio, New Stories, has recorded a CD of Hope-Booker's music entitled, Hope Is In the Air.

Bertha Hope-Booker was interviewed by The HistoryMakers on November 1, 2007.

See how Bertha Hope is related to other HistoryMakers
Click Here To Explore The Archive Today!