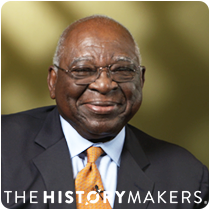 See how Bert Mitchell is related to other HistoryMakers

Accountant Bert Mitchell was born on April 12, 1938 in Manchester, Jamaica to Joseph and Edith Mitchell. He grew up on his family’s farm in Jamaica and attended Kingston Technical High School. In 1958, Mitchell immigrated with his parents and six siblings to New York City. There, he worked as a full-time clerk at a local Teamster labor union while taking night classes at Baruch College, CUNY. Mitchell earned his B.A. degree in business administration in 1963.

Mitchell was the 100th African American certified CPA in U.S. history and joined J.K. Lasser & Company as their first African American CPA in 1963. In 1965, Mitchell became the CFO of Intra-American Life Corporation, a life insurance company founded by civil rights leader and lawyer Clarence B. Jones. Mitchell began working with the Ford Foundation in 1966. While there, he earned his M.B.A. degree at Baruch College in 1968. In 1969, Mitchell became a partner at Lucas, Tucker & Company, the oldest African American owned CPA firm in the U.S. and remained there until 1972 when he started an independent accounting firm with James L. Tatum, Jr. Mitchell then partnered with Robert P. Titus to found Mitchell & Titus LLP later that year, which became the largest minority-owned accounting firm in the U.S. He served as chairman and CEO of the firm, and worked with the NAACP, the Dance Theatre of Harlem, the Jackie Robinson Foundation and the A. Philip Randolph Institute. To expand their business, Mitchell & Titus LLP entered joint venture agreements with major accounting firms such as Peat Marwick and Ernst & Young LLP. They also acquired other minority firms including Stewart, Benjamin & Brown and Leevy Redcross & Co. After serving as CEO of Mitchell & Titus LLP for thirty-six years, Mitchell retired in 2008.

Mitchell helped found the National Association of Minority CPA Firms in 1971. In 1977, he was elected to the board of directors of the American Institute of Certified Public Accountants, becoming the first African American to serve on the board. He also served as chair of the board of trustees of Ariel Mutual Funds, and was the first African American to serve as chairman of the New York State Board of Accountancy. In 1987, Mitchell became President of the New York State Society of CPAs (NYSSCPA), the largest CPA Society in the United States. During his tenure, the NYSSCPA launched the Career Opportunities in the Accounting Profession (COAP) program whose focus was to increase the number of minorities in the profession.

In 2012, the Journal of Accountancy, in celebration of its 125 years of existence in America, listed Bert Mitchell among the 125 CPAs of most impact in the accounting profession.

Mitchell and his wife, Carole Mitchell, have three children: Tracey, Robbin, and Ronald.

Bert Mitchell was interviewed by The HistoryMakers on June 29, 2018.

See how Bert Mitchell is related to other HistoryMakers