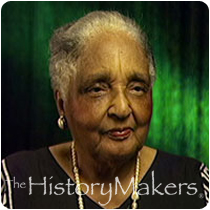 See how Bernyce Ayesha Hassan-Fletcher is related to other HistoryMakers

With the United States' entry into World War II, opportunities for women to join the workforce were abundant. Moving to Berkeley, California, Hassan-Fletcher became a bookkeeper on a naval base in Oakland. Following the war, she went to work for the phone company, becoming one of the first African American women to work the telephone switchboards in Berkeley. Later, using her bookkeeping skills, Hassan-Fletcher became the accountant for the largest co-op in the city of Berkeley. After marrying Arthur Fletcher in 1964, she became the office manager of Berkeley High School.

See how Bernyce Ayesha Hassan-Fletcher is related to other HistoryMakers
Click Here To Explore The Archive Today!