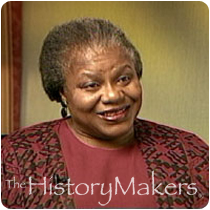 Born on October 4, 1942, Bernice Johnson Reagon grew up in Albany, Georgia, where she became involved in the civil rights movement. As a student at Albany State College in 1961, Reagon was arrested for participating in a SNCC demonstration. She spent the night in jail singing songs and after her arrest joined the SNCC Freedom Singers to use music as a tool for civic action. Reagon earned her B.A. in history from Spelman College in 1970. In 1973, she founded Sweet Honey in the Rock, an award-winning a cappella quintet that performs traditional African and African American music. Reagon received her doctorate in U.S. history, with a concentration in African American oral history, from Howard University in 1975.

Reagon composed and produced much of the Sweet Honey in the Rock's renowned repertoire. She has also composed music for several film projects, including the Emmy-winning We Shall Overcome. From 1974 to 1993, Reagon worked as a folklorist, program director and curator for the Smithsonian Institute and helped develop the Peabody Award-winning radio program Wade in the Water: African American Sacred Music Traditions for the Smithsonian and National Public Radio. She has been curator emeritus at the Smithsonian since 1993.

Reagon also enjoyed a distinguished career as a professor of history at the American University from 1993 to 2002. Her writings on African American music and the songs of the civil rights movement have been published in a number of journals and books. Bernice Johnson Reagon was the William and Camille Cosby Endowed Professor in the Fine Arts at her alma mater, Spelman College, for the 2002-2003 academic year.

See how Bernice Johnson Reagon is related to other HistoryMakers
Donate Now
Click Here To Explore The Archive Today!