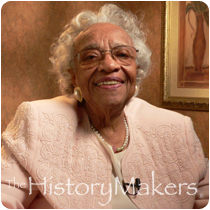 See how Bernice Irene Sumlin is related to other HistoryMakers

Sumlin was initiated into the Zeta Chapter of the Alpha Kappa Alpha Sorority, Inc., at Wilberforce College in 1946. After graduating with her B.S. degree in 1948, Sumlin transferred her Sorority membership to the Beta Eta Omega Chapter in Dayton. She furthered her education by graduating from Miami University in Oxford, Ohio, where she earned her M.A. degree. Sumlin then began her career in education. She served as a high school teacher, guidance counselor, community counselor and secondary principal before retiring. She then worked as an industrial consultant for Wright-Patterson Air Force Base.

In 1962, Sumlin succeeded LaRue Walter Frederick as Great Lakes Regional Director of Alpha Kappa Alpha Sorority, Inc., in Detroit, Michigan. Following a productive four year term she was appointed as chairman of the Sorority’s National Standards Committee in 1966. In 1972, Sumlin was elected First Supreme Anti-Basileus at the 45th Boule in Denver, Colorado.

In 1974, Sumlin was elected the 19th International President of Alpha Kappa Alpha Sorority, Inc. Sumlin’s administration donated $25,000 to Central State University for the restoration of the Hallie Q. Brown Collection of rare books by and about blacks, which had been damaged by a tornado. Additionally, during her tenure, AKA contributed half a million dollars to the United Negro College Fund. On October 25, 1974, Sumlin answered a challenge given by retiring Executive Director Carey B. Preston and initiated the Alpha Kappa Alpha Reading Experience, a national program offering individualized tutoring to undereducated inner-city youth.

In 1975, at the invitation of President and Mrs. Gerald Ford, Sumlin represented the Sorority at a reception held at the White House launching the International Women’s Year Conference. Later, she represented the Sorority at the International Women’s Year Conference in Mexico, City. In addition, Sumlin’s administration saw the installation of the Sorority’s Founders’ Window at Howard University in Rankin Chapel. She also began the recognition of sorority members with twenty-five years of service as Silver Sorors and those with fifty years of service as Golden Sorors.

Sumlin was a presenter at the Fourth African American Summit in Harare, Zimbabwe, in 1997, and attended the 1999 Summit in Ghana. Her involvement in civic, educational and professional services has brought her many awards and citations, including an honorary Doctorate of Humanities from Central State University. She has also been cited for outstanding service by the National Council of Negro Women, the Continental Society, the A.M.E. church and Outstanding Women of Dayton.

See how Bernice Irene Sumlin is related to other HistoryMakers
Click Here To Explore The Archive Today!