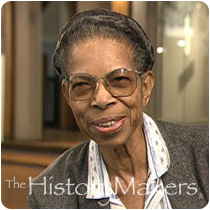 See how Bernice Hutcherson is related to other HistoryMakers

Social worker and educator, Bernice Hutcherson, was born on April 4, 1925, in Newton, Kansas, to Henrietta and Albert Ray, Sr. Hutcherson was educated in public schools, and eventually received her B.A. degree from Langston University in 1950; she was further trained at the Chicago Teacher's College and received an M.S.W. from the University of Kansas in 1969.

Throughout her nearly five-decade-long career, Hutcherson worked as an educator, beginning as a remedial reading teacher in the Chicago Public Schools system, and later as a social worker in her native Kansas. Hutcherson spent nearly twenty years with Kansas Social and Rehabilitation Services in various supervisory and training positions before taking a position as a professor of Social Work at Wichita State University in 1970. Hutcherson served on numerous university committees, including a three-year-long term as gerontology faculty chair before her retirement in 1996.

Retirement did not impede Hutcherson's commitment to the social service field; an active lecturer, she was regularly asked to run workshops and participate in academic forums. Hutcherson's numerous professional affiliations and memberships represented years of commitment to service and leadership; she remained active in the National Association of Social Workers, and the Kansas Conference on Social Welfare, and was the founding president of the Kansas Multicultural Association of Substance Abuse.

Hutcherson continued to be involved in the field of social work by volunteering through committee and board structures dedicated to substance abuse research and program development. The recipient of numerous community, professional, and academic accolades, the Wichita city council named an elder housing facility, the Bernice Hutcherson Complex, in Hutcherson's honor in 1980. In addition to her professional activities, Hutcherson and her late husband of forty years, Hubert Hutcherson, raised two daughters.

See how Bernice Hutcherson is related to other HistoryMakers
Click Here To Explore The Archive Today!