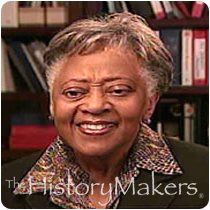 Favorite Color:
Blue
Favorite Food:
Seafood
Favorite Time of Year:
Spring
Favorite Quote:
All Things Are Possible To The One That Believes.

Favorite Color:
Blue
Favorite Food:
Seafood
Favorite Time of Year:
Spring
Favorite Quote:
All Things Are Possible To The One That Believes.

See how Bernice Baynes Brown is related to other HistoryMakers

Educator and advocate Bernice Baynes Brown was born on June 19, 1935 in Pittsburgh, Pennsylvania. She graduated from Pittsburgh's Perry High School in 1953 before attending Carnegie Mellon University where she earned her B.F.A. She later pursued graduate work in education at the University of Pittsburgh and earned her M.Ed.

She began her career in education teaching art courses at Carlow College in Pittsburgh before relocating to San Francisco, where she lectured in art history at California State University and worked as an Education Specialist for the Bay Area Urban League. In 1968, she joined Lone Mountain College as an Assistant Professor in the Education Department and in just four years became the Dean of Students. In 1976, Brown left Lone Mountain to work for the San Francisco Public Schools Commission as its Director and Commissioner. One year later, she began a ten-year run as the Program Executive for the San Francisco Foundation. For the next four years, Brown served as the Vice-President of Educational Consulting Services for Academic Enterprises while acting as Foundation Administrator for the Clorox Company Foundation.

Brown worked for the City College of San Francisco beginning in 1991. She was the Dean of Faculty and Staff Development and the Campus Dean for the Southeast Campus, and acted as the Dean of Workforce Education.

Throughout her career, she was an active advocate for education. She served as the Chair of the Vocational Educational Advisory Committee for California Schools and Colleges. She sat on the boards of directors of the Association of Black Foundation Executives, the Northern California Grantmakers, the Foundation for Community Service Cable Television, the Women and Foundations/Corporate Philanthropy group, the San Francisco African American Historical and Cultural Society, and the Commonwealth Club of California. She was a Trustee for both the San Francisco Bar Association Foundation and the Schools of the Sacred Hearts. She acted on the Steering Committee and as the Chair for the Council on Foundations' Pre-Collegiate Education Group. She remained on the boards of Global Educators, Urban Economic Development Corporations and the High Scope Education Research Foundation until the end of her life.

See how Bernice Baynes Brown is related to other HistoryMakers
Click Here To Explore The Archive Today!