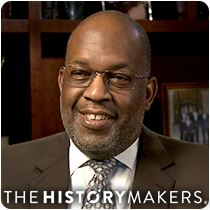 See how Bernard J. Tyson is related to other HistoryMakers

Chief executive officer Bernard J. Tyson was born on January 20, 1959 in Vallejo, California to Billie Tyson, a homemaker, and Moses Tyson, a minister. After graduating from Vallejo High School in 1977, Tyson enrolled at Golden Gate University. While still in college, Tyson worked as an administrative analyst for Vallejo General Hospital. He earned his B.S. degree in health service management in 1982, and went on to receive his M.B.A. degree from Golden Gate University in 1984.

In 1984, Tyson accepted a six-month internship at Kaiser Permanente and was then hired full-time in an administrative position. Tyson remained at Kaiser Permanente and in 1992, he was named chief executive officer of the Kaiser Foundation Hospital in Santa Rosa, California. In 1999, he was promoted to senior vice president and chief operating officer for regions outside of California and for Kaiser’s brand strategy. In 2004, the organization launched its “Thrive” advertising campaign under Tyson’s leadership. In 2006, Tyson was promoted to senior vice president for Health Plan and Hospital Operations, during which time Kaiser opened four new hospitals. In 2010, he was promoted to president and chief operating officer of Kaiser Permanente. As president, he was vocal in his support of the Affordable Care Act, which was signed into law in 2010 and faced significant hurdles. In 2013, he became the company’s first African American chairman and chief executive officer.

Tyson also received many awards and honors over the course of his career. He was a recipient of the NAACP Freedom Act Award in 2001 and was named Golden Gate University's Alumnus of the Year in 2007. He was named among the Most Influential Healthcare Leaders in both 2014 and 2015, and was a recipient of the NAACP Legal Defense and Educational Fund’s 2014 National Equal Justice Award. In 2010, Tyson was named among the Top 25 Minority Executives in Healthcare and Top 25 Most Influential African Americans.

Bernard Tyson was interviewed by The HistoryMakers on December 17, 2015.

See how Bernard J. Tyson is related to other HistoryMakers
Click Here To Explore The Archive Today!