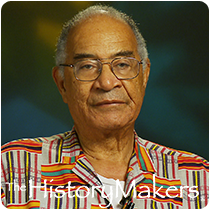 See how Bennett Johnson is related to other HistoryMakers
Donate Now

Book publishing executive Bennett J. Johnson was born in 1929 in Chicago, Illinois. At the age of two his mother, Kathryn Burnice Johnson, moved to Evanston where he lived with his two sisters and five cousins. After graduating from Evanston Township High School in 1946, Johnson attended Paine College in Augusta, Georgia for three semesters. In 1948 he went to Roosevelt University in Chicago, Illinois where he became close friends with Harold Washington, Frank London Brown and Gus Savage. After lengthy illness he enrolled in the University of California at Los Angeles in 1953, where he graduated with his B.A. degree in English and a minor in science in 1955 and his M.A. degree in English and a concentration in education in 1956. When he returned to Chicago, Illinois and began working alongside such Chicago greats as Washington, Frank Brown, Gus Savage, Richard Durham, Herman C. Gilbert and Dempsey Travis on crucial issues such as political action, social equality and economic justice.

While at Roosevelt College Johnson participated in organizing a sit-in at a restaurant across the street from Roosevelt that refused to serve Harold Washington and forced the hiring of the first Black sales clerk on State Street. In 1966 he acted as the primary liaison for the historic meeting between Elijah Muhammad and Dr. Martin Luther King, Jr. Johnson, Frank L. Brown, and Herman C. Gilbert began the independent publishing house, Path Press, Inc. in 1961. Path Press, Inc. was the first Black-owned book publishing company in the United States. The company published books from 1969 to 1972, and the again from 1982 to 2001. In 2001, Johnson temporarily closed Path Press to join Haki R. Madhubuti at Third World Press.

Bennett Johnson was interviewed by The HistoryMakers on August 19, 2013.

See how Bennett Johnson is related to other HistoryMakers
Donate Now