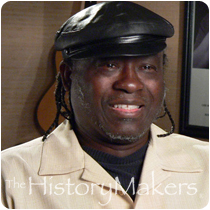 See how Benjamin Wright is related to other HistoryMakers
Donate Now

Music director, arranger, and conductor Benjamin Franklin Wright, Jr. was born on July 11, 1946 in Greenville, Mississippi. Wright started his music career while in high school, performing as a drum major in the marching band and singing Doo Wop in a group he and his friends started. Wright attended the Chicago Conservatory of Music and received his Ph.D. from the Pentecostal Bible College in Tuskegee, Alabama.

After high school, Wright embarked on his first major musical tour with rhythm and blues icon Ted Taylor. During the tour, Wright played piano and sang back-up for the band. The Ted Taylor Tour allowed Wright to experience music arrangement for the first time, and his subsequent success within the industry took him on the road with James Brown, Otis Redding, Billy Stewart and Gladys Knight and The Pips. Shortly after Wright’s touring period, he was drafted into the United States Air Force. While there, Wright met “Fats” Ford, a trumpet player who played with Duke Ellington. Ford eventually introduced Wright to Duke Ellington, an experience that changed his life forever. After Wright’s honorable discharge from the military in Alabama, he worked for several years with Bobby Moore and The Rhythm Aces, before working on the hotel circuit and jazz trios throughout the country. In 1969, Wright worked as a copyist for notable musical arrangers such as Charles Stepney, Gene Barge, Donny Hathaway and Richard Evans. Concurrently, Wright performed with Pieces of Peace, a group of musicians who recorded music sessions for Jackie Wilson, The Chi-Lites, Jerry Butler, Curtis Mayfield and The Impressions. After traveling overseas with Pieces of Peace at the end of 1971, Wright enrolled in the Chicago Conservatory of Music, and shortly thereafter formed the Benjamin Wright Orchestra. In 1975, Wright moved to Los Angeles, California and became the musical director for The Temptations, Gladys Knight and The Pips, Aretha Franklin, and Barry White and The Love Unlimited Orchestra. In 1979, Wright acted as the string arranger for Michael Jackson’s first solo album, Off the Wall, where he met producer Quincy Jones. Between 1982 and 1983, Wright opened the Ritesonian Recording Studio, and in 1987, he went back on the road as the musical director for Gladys Knight and The Pips to do a year of one-night-only performances. In 2003, Wright and long time friend and former singer with The Temptations, Louis Price, formed the Price/Wright Orchestra. Then, in 2004, Wright wrote five new arrangements for singer Brandy and produced three songs with Otis Williams for The Temptations. Wright has also done arrangements on Outkast and Justin Timberlake’s Grammy-winning albums Speakerboxxx/The Love Below, and Justified respectively. In 2005, Wright was honored by being invited to write and conduct the Norwegian Radio Symphony Orchestra for the Patty LaBelle segment of the Nobel Peace Prize celebration in Oslo, Norway.

See how Benjamin Wright is related to other HistoryMakers
Donate Now
Click Here To Explore The Archive Today!