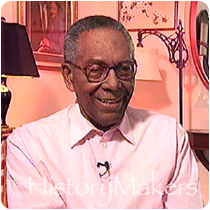 See how Benjamin Whitten is related to other HistoryMakers
Donate Now

Benjamin Carr Whitten was born on July 25, 1923, in Wilmington, Delaware. Both of his parents were teachers. His father died when he was just six years old, forcing his mother to teach school at night while working as a receptionist for a doctor during the day. In 1939, Whitten earned his diploma at the age of fifteen from Howard High School. While attending Howard he enjoyed playing tennis, roller-skating, reading and listening to the radio.

Whitten earned his bachelor’s of science degree from Pennsylvania State University where he was active in the Industrial Arts Club and became the first African American member of the honor fraternity Iota Lambda Sigma. He was also a member of Omega Psi Phi fraternity, made the Dean’s list for six semesters and graduated with honors. After graduation he was drafted into the military and served in the United States Army from 1943 to 1946. He furthered his education at Penn State, earning his master’s degree in 1948 and his Ed.D in 1960.

In 1948, he joined the staff of the Baltimore City Schools as an industrial arts teacher. He would spend the next thirty years moving up the ranks of the school system serving as a vice principal, principal and assistant superintendent for vocational education. In 1976, he was a candidate for superintendent of Baltimore City Schools. He retired from the school system in 1979.

After his retirement, Whitten served as director of the Minority Contractors Technical and Assistance Program. In this position he operated a program designed to assist minority contractors to enter and succeed in the construction industry. He served in this post until 1983, when he accepted the position of Baltimore City Urban League President, a job he held until 1988.

In 1987, Whitten received the Parren J. Mitchell Unity Award from the Baltimore NAACP. In 1989, the wing of a Baltimore vocational facility, the Westside Skill Center was dedicated in Dr. Whitten’s honor.

Benjamin Whitten passed away on September 21, 2012.

See how Benjamin Whitten is related to other HistoryMakers
Donate Now
Click Here To Explore The Archive Today!