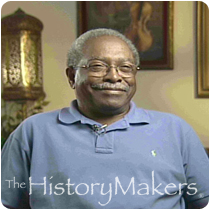 See how Benjamin Tucker is related to other HistoryMakers

Noted jazz musician Benjamin Mayor Tucker was born on December 13, 1930 in Brentwood, Tennessee. Tucker and his twin brother grew up in Nashville with their parents Carrie Clayborne and Joseph Tucker. He graduated from Pearl High School in 1946 and matriculated at Tennessee State University in 1949 as a music major. In 1950, he joined the United States Air Force, serving for four years.

Tucker’s love for music began at an early age. He taught himself to play the tuba at the age of thirteen and later the bass violin and piano. Some of his favorite jazz musicians included Louis Armstrong, Duke Ellington and Fletcher Henderson. In 1956, Tucker moved to Hollywood, California, where he met Warren Marsh. His first recording was a collaboration with Marsh entitled Jazz of Two Cities in 1959. That same year, Metronome magazine named him one of the world’s top ten bass players. In 1961, he recorded Coming Home Baby, a hit for Herbie Mann and Mel Torme. This song was featured in the film Get Shorty.

Tucker became Savannah, Georgia’s first African American radio station owner in 1972 when he purchased WSOK Radio. WSOK was the top AM station for thirteen years. His station had over 400,000 listeners and a reputation of integrity in advertising. In 1989, Tucker opened Hard Hearted Hannah’s, a jazz club. He was not only the owner of the club, but he also led the band six nights a week.

Tucker served on the boards of several organizations. President Jimmy Carter appointed him to serve on the Selective Service Board, and President Ronald Reagan reappointed him. Tucker for the 1996 Olympic Committee in Atlanta, Georgia. He was also the creator of the Telfair Jazz Society in Savannah.

Tucker and his wife, Gloria, resided in Savannah, Georgia. They had two adult children, Sabra and Wayne.

Tucker was interviewed by The HistoryMakers on January 23, 2007.

Sponsored by Savannah Chapter of the Links, Inc

See how Benjamin Tucker is related to other HistoryMakers
Click Here To Explore The Archive Today!