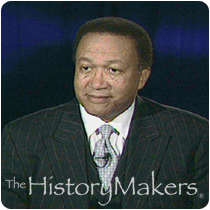 See how Benjamin F. Chavis, Jr. is related to other HistoryMakers
Donate Now

Benjamin Franklin Chavis, Jr, was born on January 22, 1948, in Oxford, North Carolina. Chavis's parents were educators who taught at a school for African American orphans. Chavis’s activism was in his bloodline; his grandfather, John Chavis, the first black graduate from Princeton University, set up an underground school for African Americans who were forbidden to learn to read and write. Chavis became active in civil rights at the young age of thirteen when he attempted to integrate the all white library in his hometown; although he was ultimately unable to check out any books, he was the first African American to obtain a library card and to attempt to borrow books. Chavis graduated from Mary Potter High School in 1965 where he was a member of the football team and editor of the school newspaper. While a high school student Chavis also wrote for the local black paper, The Carolinian.

While a freshman at Saint Augustine College, Chavis served as a youth coordinator for the Southern Christian Leadership Conference (SCLC) and on the advance team for Dr. Martin Luther King, Jr. Chavis received his B.S. degree in chemistry in 1969 from the University of North Carolina at Charlotte. That same year, Chavis was appointed Southern regional program director of the United Church of Christ Commission for Racial Justice (UCC-CRJ). In 1971, the UCC sent Chavis to Wilmington, North Carolina, to help desegregate the public school system. A year later Chavis and the now famed Wilmington Ten were arrested and falsely convicted of conspiracy and arson; after serving nearly a decade in prison and receiving international attention the charges were eventually overturned in 1980. While in prison Chavis wrote two books: An American Political Prisoner and Psalms from Prison.

In 1980, Chavis received his Master’s of Divinity degree from Duke University and went on to earn his Doctorate of Ministry from Howard University. In 1985, Chavis was named executive director of UCC and CEO of the UCC-CRJ; in 1993 he became the youngest person to serve as executive director and CEO of the NAACP. After leaving the NAACP in 1994, Chavis served as executive director of the National African American Leadership Summit. In 1995, Chavis was appointed National Director of the Million Man March, one of the most successful gatherings of the 20th century. Chavis was later named East Coast Regional Minister of the Nation of Islam and organized the Million Family March in 2000. In 2001, along with Russell Simmons, Chavis co-founded the Hip-Hop Summit Action Network, a coalition of hip-hop artists and community leaders dedicated to fighting the war on poverty and injustice.

See how Benjamin F. Chavis, Jr. is related to other HistoryMakers
Donate Now
Click Here To Explore The Archive Today!