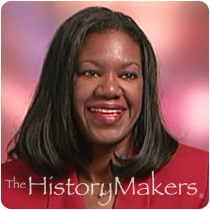 See how Benita Fitzgerald Mosley is related to other HistoryMakers

Olympian and marketing executive Benita Fitzgerald Mosley, a native of Dale City, Virginia, graduated from the University of Tennessee in 1984 with her degree in industrial engineering; she won a gold medal in the 100-meter hurdles in the Olympic Games the same year. Mosley was an athlete on the United States Olympic Teams of 1980 and 1984, and an alternate for the 1988 team; during her athletic career, she was the second American, and the only African American woman at that time to have won an Olympic gold medal in the 100-meter hurdles. Mosley went on to become a fifteen-time All-American; an eight-time national champion; and a gold medalist in the 1983 Pan American Games.

In 1985, Mosley began an engineering career as a computer software and hardware systems developer for defense contractors. After six years in this field, Mosley switched her career to sports marketing and administration, becoming a regional director for Special Olympics International in Washington, D.C. From 1993 to 1995, Mosley served as program director for the marketing division of the Atlanta Committee for the Olympic Games. In 1995, Mosley began working for the United States Olympic Committee as the director of the ARCO Olympic Training Center in San Diego; from 1997 until 2000, she served as the USOC's director of Olympic training centers. In March 2001, Mosley was appointed president of Women in Cable and Telecommunications, and Cablefax ranked her fiftieth on its annual list of the 100 most influential executives in the industry.

Mosley was inducted into both the Virginia High School Hall of Fame, and the Virginia Sports Hall of Fame; she was named Sportswoman of the Century by The Potomac News and ranked twelfth on a list of the Top 50 Sports Figures of the Century from Virginia by Sports Illustrated. Track and Field News named Mosley Hurdler of the Decade for the 1980s, and in 1996 the United States Sports Academy named her its Distinguished Service Award winner. Additionally, in 1996, Mosley was one of the eight U.S. Olympians chosen to carry the Olympic Flag into the stadium during the Atlanta Olympic Games opening ceremony.

Mosely married Ron Mosley, with whom she had a son, Isaiah.

See how Benita Fitzgerald Mosley is related to other HistoryMakers
Click Here To Explore The Archive Today!