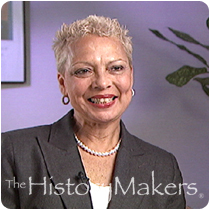 See how Benaree P. Wiley is related to other HistoryMakers
Donate Now

Corporate chief executive Benaree “Bennie” Pratt Wiley was born on May 13, 1946, in Washington, D.C. Her mother, Mildred Petticord Pratt, died when she was two years old, and her father, Carlisle Pratt, was an attorney and judge before his death in 1993. Wiley grew up in Washington, D.C., and was raised by her paternal grandmother Hazel and her aunt, Aimee Pratt. She is also the sister of Sharon Pratt Kelly, who served as the mayor of Washington, D.C. from 1991-1995.

Wiley attended the public schools of Washington and graduated from Howard University in 1968 with a B.A. degree in marketing. In July 1970, she married Fletcher “Flash” Wiley and a month later they moved to Cambridge, Massachusetts, where she entered Harvard University’s Business School, graduating with an M.B.A. in 1972. After receiving her M.B.A., she served as a consultant with such corporations as Abt Associates, Contract Research Corporation and Urban Systems Research and Engineering. As an independent consultant, Wiley worked with non-profit organizations to build their capacity and refine their program delivery. She then combined her interests in business and child development with the establishment of a high-end toy store, Giocatolli, on Martha’s Vineyard in Massachusetts. During her time working as a consultant, her son, Pratt was born in 1976 and her daughter, B.J., in 1978.

Wiley is highly active in the Boston community. She is a past chair of the directors of the Children’s Museum in Boston, a trustee of Boston College, and overseer of WGBH Educational Foundation, a director of the Greater Boston Chamber of Commerce and a director of the Boston Foundation. As a former director of the Crispus Attucks Children’s Center, she and her husband were honored for their two decades of service with the dedication of a playground in their name at the Center. In 2003, Wiley was selected as one of Boston’s most powerful women by Boston Magazine.

Wiley retired from The Partnership, Inc., in 2005. She and her husband reside in Boston.

See how Benaree P. Wiley is related to other HistoryMakers
Donate Now
Click Here To Explore The Archive Today!