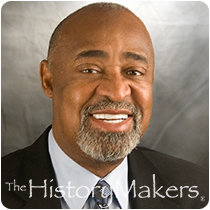 Government official Robert Benjamin (Ben) Johnson was born on July 14, 1944 in Marion, Arkansas to Robert and Willie Johnson. Johnson was raised in South Bend, Indiana, where he graduated from high school. He went on to attend the Indiana Military Academy and was commissioned into the U.S. Army as a 2nd Lieutenant in 1967.

From 1967 to 1968, Johnson worked for WSBT-TV, where he became the first black television news reporter in South Bend, Indiana. Johnson then served as director of employment services for ACTION Inc., the St. Joseph County anti-poverty agency, and as managing director of the St. Joseph County Community Federal Credit Union. In 1975, he was the first African American to mount a serious campaign for mayor of South Bend, but was not elected. Two years later, in 1977, Johnson left South Bend for Washington, D.C., where he became director of the National Center for Urban Ethnic Affairs Credit Union Institute, and served as special assistant to the chairman of the board of the National Credit Union Administration.

In 1979, Johnson joined President Jimmy Carter’s Administration as director of consumer programs and special assistant to Esther Peterson. From 1983 to 1987, he worked as the administrator of the Business Regulation Administration, where he oversaw the governing of corporations that conducted business in the District of Columbia. In 1988, Johnson was appointed administrator of the Housing and Environmental Administration and directed enforcement and compliance of housing and environmental laws in Washington, D.C. He was then named director of the District of Columbia's Department of Public Assisted Housing, where he worked until 1993, when he joined President Bill Clinton’s White House staff as an associate director in the Office of Public Liaison. Johnson then served as special assistant to the President, and was responsible for all areas of outreach to the African American community. He later served as deputy assistant to the President; and, in 1999, was appointed assistant to the president and director of the White House Office on the President's Initiative for One America, where he oversaw the first free-standing White House office in history to help close the opportunity gaps that exist for minorities in the United States.

Johnson has also served as senior counselor to Porter Novelli, Ogilvy, the National Cancer Institute and Spectrum Sciences, among others. He has spoken at many institutions and organizations including Harvard University, the Brookings Institute, the U.S. Chamber of Commerce, and the Aspen Institute. Johnson chaired the board of the One America Foundation, and served on the board of directors of the AFLAC Corporation. He was also a deputy chairman of the Democratic National Committee, and served on the DNC’s Rules and the Bylaws Committee. His many awards include an honorary doctorate degree from Morgan State University and the Washington, D.C. Distinguished Government Service Award.

Johnson lives in Upper Marlboro, Maryland with his wife, Jacqueline. They have five children and eleven grandchildren.

Ben Johnson was interviewed by The HistoryMakers on March 19, 2014.