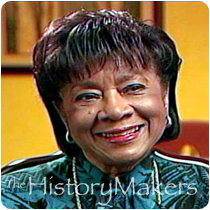 "Don't be afraid of the space between your dreams and reality. If you can dream it, you can make it so."

Broadcast journalist Belva Davis was born on October 13, 1932. She attended Berkeley High in Berkeley, California, graduating in 1951. She was accepted at San Francisco State University. However, her family could not afford the tuition, and Davis began working at the Naval Supply Center in Oakland.

Davis's first paid writing job was as a freelance writer for Jet magazine. She soon found work with several weekly black newspapers, including the Bay Area Independent and the San Francisco Sun-Reporter. Davis's career in broadcasting began at radio station KSAN, where she read newspaper clips on the air, becoming the first black female at KSAN. Davis left KSAN to work for another radio station, KDIA. Here she had a regular two-hour radio show which featured music, studio interviews and political coverage.

In 1966, Davis was hired to replace television news anchor Nancy Reynolds on KPIX-TV, San Francisco's CBS affiliate. This made Davis the first female African American television reporter on the west coast. Davis also hosted and helped to create All Together Now, one of the country's first prime-time public affairs programs to focus on ethnic communities. In 1977, left KPIX to work at the PBS affiliate in San Francisco, KQED. She anchored A Closer Look and then Evening Edition from 1977 to 1981. She next took a job as anchor and urban affairs specialist for KRON-4, where she worked full time until 1999, when she became a special projects reporter for the television station.

Davis has received countless awards for her contributions to the field of journalism. These awards include national recognition from the Corporation for Public Broadcasting, San Francisco State University and the National Education Writers Association. She received the Northern California Chapter of National Academy of Television Arts and Sciences' highest lifetime achievement award, the Governor's Award, in 1996. Davis is also well known for her work as a labor activist, vice president of the American Federation of Television and Radio Artists, and for being active within the community.