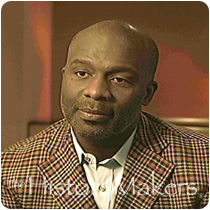 Favorite Color:
Blue
Favorite Time of Year:
Christmas
Favorite Vacation Spot:
Hawaii
Favorite Quote:
I Can Do All Things Through Christ That Strengthens Me.

Favorite Color:
Blue
Favorite Time of Year:
Christmas
Favorite Vacation Spot:
Hawaii
Favorite Quote:
I Can Do All Things Through Christ That Strengthens Me.

See how BeBe Winans is related to other HistoryMakers

Music producer, R&B singer, songwriter and gospel singer BeBe Winans was born Benjamin Winans on September 17, 1962 in Detroit, Michigan. He, along with his nine siblings, started singing in the choir at Mount Zion Church of God and Christ in Detroit. All of the Winans brothers and sisters were talented singers and contributed greatly to the church choir, in which both Winans parents also performed.

Winans began his career as a background singer for his famous brothers,The Winans. He and his sister, CeCe, joined the television show Praise the Lord as the “PTL Singers” in 1982 and released their first record, “Lord Lift Us Up”, in 1984. BeBe and CeCe Winans eventually recorded five albums together including the self titled BeBe & CeCe Winans (1987), Heaven (1988), Different Lifestyles (1991), First Christmas (1993), and Relationships (1994). BeBe recorded numerous solo albums including BeBe Winans (1997), Love & Freedom (2000), Live and Up Close (2002), My Christmas Prayer (2004), and Dream (2006), which features the single “I Have A Dream.” The song uses samples from the historic speech by Dr. Martin Luther King, Jr. at the 1963 March on Washington along with Winans’ singing of some of its passages. Winans has also recorded songs with such entertainers as Stevie Wonder, Brian McKnight, Whitney Houston. In 2004, Winans made his film debut with a role in the remake of The Manchurian Candidate, featuring actors Denzel Washington and Meryl Streep. He also starred in the off-Broadway touring musical production of King Solomon Lives, A Nubian Love Story. Winans previously starred on Broadway in the shows Civil War and Don’t Get God Started and the national tour of What’s On the Hearts of Men.

BeBe Winans was interviewed by The HistoryMakers on November 2, 2007

See how BeBe Winans is related to other HistoryMakers
Click Here To Explore The Archive Today!