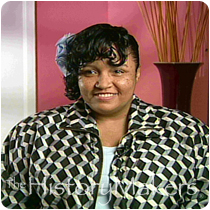 See how Barrietta Killiebrew is related to other HistoryMakers
Donate Now

Real estate agent and Contract Specialist, Barrietta Killiebrew was born on September 23, 1960 in Chicago, Illinois. Born to Carol Austin and James Boyd, the oldest of eight children, Killiebrew was raised in St. Louis and Ferguson, Missouri. Killiebrew attended Blewitt Elementary and Ferguson Junior High School in St. Louis. In 1979, she graduated from McClure High School in nearby Ferguson, Missouri. Killiebrew graduated with her A.B. degree from Florissant Valley College in 1982. She went on to earn her B.A. degree in telecommunications from Lindenwood College in St. Charles, Missouri. She interned in public affairs at the local Fox television affiliate, then in 1986, Killiebrew was hired by the United States Department of Defense. She currently holds a position as a Contract Specialist with The St. Louis District, Corps of Engineers.

In 1998, Killiebrew began her career in real estate by working for Caldwell Banker Gundaker. That same year, she focused on purchasing a Ferguson landmark, the Wildwood Plantation. The Wildwood Plantation was built by Africans enslaved by Major Joseph LaMotte more than 150 years ago. Ironically, LaMotte served as Lt. Commander of the Seminole Negro Indian Scouts at Fort Clark, Texas during the Mexican War. He had Wildwood built in 1856, which looks similar to his father’s North Berm House in North Carolina – also built before slavery ended. After the Emancipation Proclamation, the house passed through some six different owners and stood vacant for almost sixty years during the time span of 150 years. Surviving a considerable legal struggle with local housing inspectors, Killiebrew became the first African American owner of the Wildwood Plantation.

Constantly engaged in the restoration of the plantation, Killiebrew was able to get Wildwood officially listed on the National Register of Historic Places in 2006. Knowledgeable of the stories and mythology surrounding the property, she conducts historical tours by appointment.

Killiebrew was interviewed by The HistoryMakers on October 18, 2007.

See how Barrietta Killiebrew is related to other HistoryMakers
Donate Now
Click Here To Explore The Archive Today!