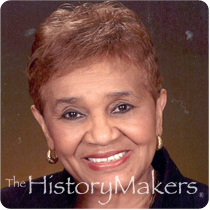 Favorite Color:
Green, Pink
Favorite Time of Year:
Fall, Spring
Favorite Vacation Spot:
Southern California
Favorite Quote:
You Can Do Anything That You Want To Do. It Takes Work.

Favorite Color:
Green, Pink
Favorite Time of Year:
Fall, Spring
Favorite Vacation Spot:
Southern California
Favorite Quote:
You Can Do Anything That You Want To Do. It Takes Work.

See how Barbara Wright-Pryor is related to other HistoryMakers

As a mezzo-contralto recitalist and soloist of oratorio, her first performance was with the Dorian Choral Ensemble. In 1961, she performed with Irving Bunton’s Chicago Concert Chorale. Duke Ellington featured the group in his 1963 My People musical revue, celebrating the accomplishments of Blacks in the one hundred years since Abraham Lincoln issued the Emancipation Proclamation. In 1968, Wright-Pryor was choral director for Ellington’s Sacred Concert. Over the years, Wright-Pryor has performed with the members of Chicago’s Lyric Opera, Chicago Symphony Orchestra, Civic Orchestra of Chicago, South Shore Philharmonic, Southside Family Chamber Orchestra and String Quartet, and the Chicago Park District Orchestra. Her concert stage performances have featured Sir Michael Tippett’s A Child of Our Time; Rossini’s Stabat Mater; J. S. Bach’s Cantata No. 54 for Contralto and Orchestra, Christmas Oratorio, and Mass in B Minor; Handel’s Messiah and the works of Mozart, Mendelssohn, and Verdi. Wright-Pryor has performed Saul of Tarsus by Betty Jackson King, and in addition to Betty Jackson King, composers Rollo Dilworth, Barry K. Elmore, Robert L. Morris and Howard Savage have dedicated compositions to her. For the 1998 Sixteenth International Duke Ellington Conference, Wright-Pryor served as producer/director and vocalist to restage Ellington’s lost 1963 My People musical revue. Her musical accomplishments were achieved while serving for thirty-five years as counselor-educator with the Chicago Public Schools and adjunct professor at DePaul University.

A charter member of the Community Advisory Council of the Chicago Symphony Orchestra (CSO), Wright-Pryor helps monitor the CSO’s progress in achieving its diversity agenda. She also serves on the Artistic Planning Committee of the Chicago Symphony. Wright-Pryor is a member of the Board of Trustees for the Civic Orchestra of Chicago, and for over a decade, she has been president of the Chicago Music Association, which was founded as the first branch of the National Association of Negro Musicians, Inc. in 1919. Wright-Pryor was honored by the Society for the Advancement of the Vivian G. Harsh Collection of Afro-American History and Literature of the Chicago Public Library in 1999, and they have requested her papers. She was inducted into Wendell Phillips Elementary and High Schools’ Hall of Fame and received an honorary Doctor of Music degree in 1999. An expert and critic of African American contributions to classical music, Wright-Pryor serves as the classical music critic for the Chicago Crusader.

See how Barbara Wright-Pryor is related to other HistoryMakers
Click Here To Explore The Archive Today!