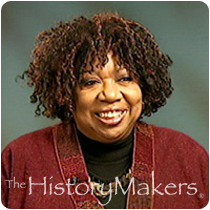 See how Barbara Samuels is related to other HistoryMakers
Donate Now

Founder and president of THE LION'S SHARE, INC. Barbara Samuels was born August 15, 1937, in Gary, Indiana. The daughter of Blanche and Dr. John Wilson, Samuels grew up in Chicago where she attended Burke Elementary School and graduated in 1955 from Lucy Flower Vocational High School. She then attended the School of the Art Institute of Chicago and Chicago State University.

Her career began at Sears Roebuck and Company in 1963 as a copywriter for the Sears & Roebuck Catalog. She was the first African American to hold that position. Samuels worked as part of a design team at Sears & Roebuck that made household accessories including lighting fixtures, dinnerware and tabletop items. Samuels was then promoted to buyer of handbags and later to national buyer of casual footwear. In 1998, she was named global "Buyer of the Year," winning out over 300 other contestants. She was also one of the first African Americans to visit many of the manufacturing facilities abroad.

After an early retirement, Samuels launched THE LION'S SHARE in 1994. The firm offers practical, profit oriented advice for fledgling designers, merchants and small companies in the fashion industry. Samuels organizes fashion shows for major organizations and charities such as the Jesse Owens Foundation, the Chicago Urban League, Delta Sigma Theta Sorority, and the American Academy of Pediatrics. As a media personality, she has participated in fashion segments on Channel 32 Fox TV, WVON Radio, and the Bertrice Berry Show. Samuels was wardrobe and set design consultant for public television's America's Family Kitchen with VertaMae Grosvenor. She has also written a fashion column for N’DIGO. Samuels serves as board member or officer of several fashion-related entities, including Fashion Group International, the Apparel Industry Board, Inc. of Illinois, GenArt, The Color of Fashion, the Leaguers of the Chicago Urban League and the Costume Committee of the Chicago Historical Society.

Samuels has two sons, Michael and Gregory. She resided on Chicago's North Side.

See how Barbara Samuels is related to other HistoryMakers
Donate Now
Click Here To Explore The Archive Today!