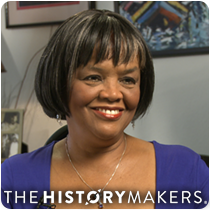 See how Barbara Rodgers is related to other HistoryMakers
Donate Now

Television news anchor Barbara Rodgers was born on September 27, 1946 in Knoxville, Tennessee to Anna Connor, a homemaker, and Jackson Rodgers, a minister. In 1968, she received her B.S. degree in business education from Knoxville College. She attended graduate school at SUNY Buffalo in 1976 for creative writing, and also completed graduate coursework at the University of Chicago in 1986.

The Eastman Kodak Company in Rochester, New York hired Rodgers in 1968 as a computer programmer, one of only a few African American female computer programmers at the time. Rodgers later became a public affairs researcher for Kodak, before becoming an instructor and department head of the business skills department of the Rochester Educational Opportunity Center in 1971. In 1972, Rodgers joined WOKR-TV in Rochester, New York where she became the station’s first female news reporter and first African American news anchor. Rodgers joined KPIX-TV, a CBS affiliate in San Francisco, California in 1979 as a reporter, later becoming a co-anchor on the weekend and noon Eyewitness News broadcasts. She helped to create and host Bay Sunday in 1989, an award-winning public affairs program. She co-founded the Bay Area Black Journalists Association (BABJA), the Bay Area chapter of the National Association of Black Journalists, in 1982. In 1985, Rodgers was selected for the William Benton Fellowship in Broadcast Journalism at the University of Chicago, the first African American woman to become a Benton Fellow. Rodgers was chosen in 1993 as one of five journalists to participate in the South Africa Journalists Exchange, a collaboration between the National Association of Black Journalists, the Freedom Forum and South Africa. She earned an Emmy for her hour-long documentary, “South Africa After Apartheid.” Rodgers retired from KPIX in 2008. In 2010, she joined Comcast as a regular host on Comcast Newsmakers, and in 2011 became host of the “Bronze Report” cable show. Rodgers co-founded Friends of Faith, Inc., an organization that helps provide information and financial support to low income and underinsured individuals undergoing breast cancer treatment.

Rodgers received numerous honors and awards for her work. She won seven Emmy Awards and the Governors’ Award from the National Academy of Television Arts and Sciences. In 1992, she was selected by the San Francisco League of Women Voters as a “Woman Who Could Be President.” Between 1981 and 2007, she won five “Excellence in Journalism Awards” from the National Association of Black Journalists, and was awarded the Madam C.J. Walker Pioneer Award from the National Coalition of 100 Black Women in 2004. Rodgers received the Frederick D. Patterson Outstanding Individual Award from the United Negro College Fund in 2008, and was recognized twice by American Women in Radio and Television, Inc. for her outstanding work in broadcasting.

Barbara Rodgers was interviewed by The HistoryMakers on December 15, 2015.

See how Barbara Rodgers is related to other HistoryMakers
Donate Now