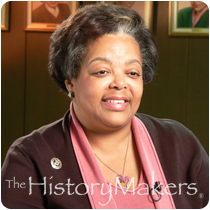 Association chief executive Barbara Anne McKinzie was born on January 2, 1954 in Ada, Oklahoma to Leonard T. and Johnnie M. Moses Watson. Under McKinzie’s leadership the AKA Sorority Annual Boulé’s revenues have increased and video telecasting was instituted to accommodate conference seating in multiple areas. In addition, the Sorority’s operational and delivery systems were updated and upgraded.

McKinzie attended East Central University where she was initiated into the Eta Pi Chapter of the AKA Sorority in 1973. After receiving her B.S. degree in 1976, McKinzie went on to earn her M.A. degree from Northwestern University Kellogg School of Management in 1997. In 1978, McKinzie became the Financial Advisor for AKA Sorority National President Barbara K. Phillips and served again in this capacity in 1982 under the leadership of Ms. Faye B. Bryant. She went on to become the Fourth Executive Director of the AKA Sorority in 1985. During that year, McKinzie also assumed the position of Second Secretary for the Sorority’s Educational Advancement Foundation where she increased the Sorority’s annual cash flow by more than $1 million. Afterwards, in 1998, McKinzie was elected as the Sorority’s International Treasurer. She also chaired the Finance and Strategic Planning Committee. Under her leadership, the Committee issued a host of recommendations that will strengthen the AKA Sorority for decades to come.

In 2000, McKinzie ran unopposed for another two-year term as International Treasurer. That following year, she was recognized for her achievements and was named the 2001 Woman of the Year by the American Biographical Institute. The New York Network Journal later named McKinzie one of the Top 25 Outstanding Business Women of 2002. That same year, she was elected First Vice President of the AKA Sorority thereby positioning her to be International President. In 2006, during the Sorority’s convention in Detroit, she ascended to AKA’s top leadership position.

McKinzie augments her commitment to AKA Sorority, Inc. by serving other organizations whose missions parallel her passion. She became a member of the Board of Directors of Africare in 2005. Its programs primarily address health and HIV/AIDS and agricultural needs. McKinzie has also served as Comptroller for the Chicago Housing Authority.

As International President of AKA Sorority, McKinzie adopted as her signature program theme "Extraordinary Service Program", ESP, which is an acronym for Economics, Service (Sisterhood) and Partnerships. This program is achieved through five platforms focused on entrepreneurship: economic keys to success, economic strength of the black family, economics in technology (the first Undergraduate Signature Program), health resource management and economics, resulting in program funding exceeding $3 million and two million hours of service in 2007.

She has received numerous honors in recognition of her leadership commitment and documented results. In 2006, at Stillman College’s 130th Founder’s Day Convocation, McKinzie received her doctor of humane letters from Stillman College in Tuscaloosa, Alabama.

McKinzie has served as comptroller for the Chicago Housing Authority and Deputy Director of Finance and Administration for Chicago’s Neighborhood Housing Services. She is currently President of BMC Consulting, a firm that specializes in developing financial strategies for corporations and non-profit entities.

McKinzie was interviewed by The HistoryMakers on February 20, 2008 as part of the Alpha Kappa Alpha Sorority’s Centennial Boulé 2008 celebration. Segments of these interviews were used in a DVD entitled A.K.A. Sorority: A Legacy of Supreme Service.