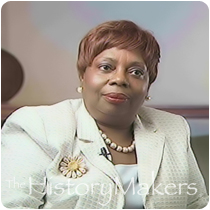 See how Barbara L. Thomas is related to other HistoryMakers
Donate Now

Barbara Louise Thomas was the president and CEO of the Chicago based National Black Master of Business Administration Association (NBMBAA). Thomas was born on December 5, 1947, in Dublin, Georgia, one of Jerrie Lee Tart and Horace Sanders’s thirteen children. Thomas was raised by foster parents Georgia and George Monroe in Dublin, where she attended segregated public schools and graduated from Oconee High School. In 1965, Thomas moved to New York City with her birth mother and took a job at Harlem Youth Opportunities Unlimited - Associated Community Teams (HARYOU-ACT) where she met her husband. Thomas went on to receive her B.A. degree from New York's Bernard Baruch College in 1970 and her M.B.A. degree from Columbia University in 1973.

While a university student, Thomas clerked at CBS’s Radio Division. After completing her education, Thomas moved into the CBS television division and managed network cut-ins, a position she credits with opening the door to her twenty-five year career at CBS. Eventually Thomas was the first African American woman to attend CBS’s School of Management. Thomas later became director of finance and administration for CBS, and left the network in 1989 after serving as the first African American woman to act as a senior vice-president.

Citing her faith as a major sustaining force in her life, Thomas remained active in her church. Thomas raised two daughters and had five grandchildren.

Sponsored by The Jay Pritzker Foundation

See how Barbara L. Thomas is related to other HistoryMakers
Donate Now
Click Here To Explore The Archive Today!