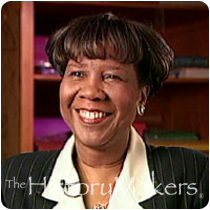 See how Barbara Farmer is related to other HistoryMakers
Donate Now

Elementary school principal and education professor Barbara W. Farmer was born in Newport News, Virginia on February 16, 1946 to Rebecca and John Wilson. After graduating from Huntington High School in Newport News in 1963, she went on to earn her B.S. degree in business education from Hampton University in 1967. Farmer worked as an English teacher at Campbell County High School in Lynchburg, Virginia for one year. She married Edgar I. Farmer in 1968 and moved back to Hampton, Virginia where she taught business education at Kecoughtan High School from 1968 until 1974. Farmer continued teaching at various schools and community colleges, mostly in North Carolina, until 1994. She went on to receive her M.S. degree in education administration and supervision from North Carolina A & T State University, and her Ph.D. degree in educational leadership from the University of North Carolina at Chapel Hill.

In 1997, she became the first African American principal hired in the State College, Pennsylvania area school district. Farmer has also served as professor at Pennsylvania State University and hosted several shows. She is the former host of “What Matters” (a call-in television/radio show about diversity issues) and an “Issues Program” on WPSU Inside/Out series. Farmer’s research interests include organizational structures of teachers in traditional and magnet schools, cultural diversity initiatives, and leadership initiatives. In 2007, she co-edited Diversity in America: Visions of the Future, a textbook that discusses various issues of diversity. She also contributed a chapter to Leading with Character.

Farmer and her husband have three children: Becky, Eric, and Edgar, Jr.

See how Barbara Farmer is related to other HistoryMakers
Donate Now
Click Here To Explore The Archive Today!