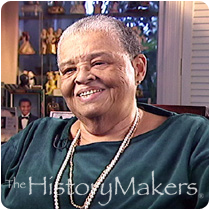 See how Barbara Dodson Walker is related to other HistoryMakers

An expert in the study and recordation of African American life and history, Barbara Dodson Walker was born January 18, 1930 in Washington, D.C. She grew up in the Georgetown area, which, at that time, had a large African American community. Schools were segregated, but Walker felt that she had the best education possible. She earned a B.S. in elementary education at Miner Teachers College in 1951, and an M.Ed. in 1972 from Federal City College. Walker pursued additional graduate work at Purdue University and the University of the District of Columbia.

During her thirty-two year career in education (1951-1983) Walker served in the D.C. Public Schools in several assignments, including coordinator of the Title I program with an emphasis in the multicultural population; resource teacher in the vital development of the critical reading and math programs for young children; and testing chairperson charged with developing standards for basic skills.

It was through her marriage to James Dent Walker that she nourished her interest in the recording of history and historical documents. Her husband would eventually serve as the director of local history & genealogical programs at the National Archives. After his retirement in 1979, he went to work at the Daughters of the American Revolution (DAR), and became involved in a project to identify the African Americans who were involved in the American Revolution. Walker assisted her husband in the preparation of the Rhode Island Patriots, a segment of this project. His work there was a result of an African American wanting to join a chapter of the DAR and not be an at-large member of the DAR.

After her retirement from D.C. Schools, Walker participated in many diverse research projects. She indexed the first ten years of the Journal of the Afro-American Historical and Genealogical Society and researched the history of the D.C. Schools and the Epiphany Catholic Church of Georgetown for Black Georgetown Remembered. She researched and wrote essays of the Paul Lawrence Dunbar High School and Charles Sumner School Museum and Archives, both located in Washington, DC. This work appeared in the Journal of Negro Education. Walker is developing a curriculum for students in the elementary grades to assist them in writing their family histories.

Walker is a charter and life member of the Afro-American Historical and Genealogical Society, Inc. and has worked on behalf of the Society in many capacities. This is the only national organization involved in documenting African American's family history and genealogy. She serves as the national president and in so doing has made many contributions to its sustenance. There are now twenty-three chapters of this Society across the nation. Walker has served also on the boards of Georgetown Heritage Trust, where she coordinated the documentation of the homes in the historic district of Georgetown; the Federation of Genealogical Societies; and the Association for the Study of African American Life and History.

Walker has four adult children and resides in Washington, DC.

See how Barbara Dodson Walker is related to other HistoryMakers
Click Here To Explore The Archive Today!